Oscar Duarte, The First Nicaraguan To Play In The World Cup

Although Nicaragua did not quality for World Cup play 2014, the country and its people are living the game through one of its own, Oscar Duarte, a key player for the surprising Costa Rica team that has so far beat two world champions and queuing up to beat its third this morning.

The Nicaraguan national football team has never qualified for the World Cup. Their last attempt was for the 2014 World Cup, which they failed to qualify from a group with Panama and Dominica. The pinoleros ended in second place defeating Dominica twice and losing to Panama, first only by one.

In Monday’s edition of La Prensa, the Nicaraguan daily praises the work of Duarte for the Costa Rican national team. “Oscar Duarte le dio un plus a la selección de Costa Rica”, (Oscar Duarte gave a plus to the selection of Costa Rica), headlines the online edition. 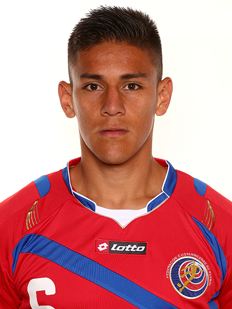 Continuing in its praise, La Prensa tells its people that Duarte has been the outstanding player Costa Rica’s defence in the 2014 World Cup, not only for his strength, good game of moving up and down the failed, but a big plus for their attacks, for his aggressiveness in the passing that led to Duarte putting a goal.

For many the Nicaraguan born player for Costa Rica’s national team was surprise, first for earning his post among the 23 players representing Costa Rica in Brazil, and then for his eleventh hour goal giving the Ticos a boost against a national champion (Uruguay), that led to a second (Italy) and possibly a third today.

Duarte is the first Nicaraguan to take part in World Cup play.

Duarte began acclimating himself to the Costa Rican football scene in the Saprissa youth program. After five years, 52 appearances and 2 goals for Saprissa at the professional level, level, Duarte joined Club Brugge of the Belgian Pro League in 2013.

While he is still relatively untested on the international level, Duarte was a part of an experimental side at the 2011 UNCAF Copa Centroamerica where Costa Rica finished second, losing the final 2-1 to Honduras, though the centre-back failed to see any action. Then-coach Ricardo La Volpe said of the youngsters at the competition: “The experience that the young lads have picked up is incredibly important.