The Pan-American Highway  Spanish: Ruta Panamericana) is a network of roads measuring about 48,000 kilometres (30,000 mi) in total length, except for a rainforest break of approximately 100 km (60 mi), called the Darién Gap, the road links almost all of the mainland nations of the Americas in a connected highway system. 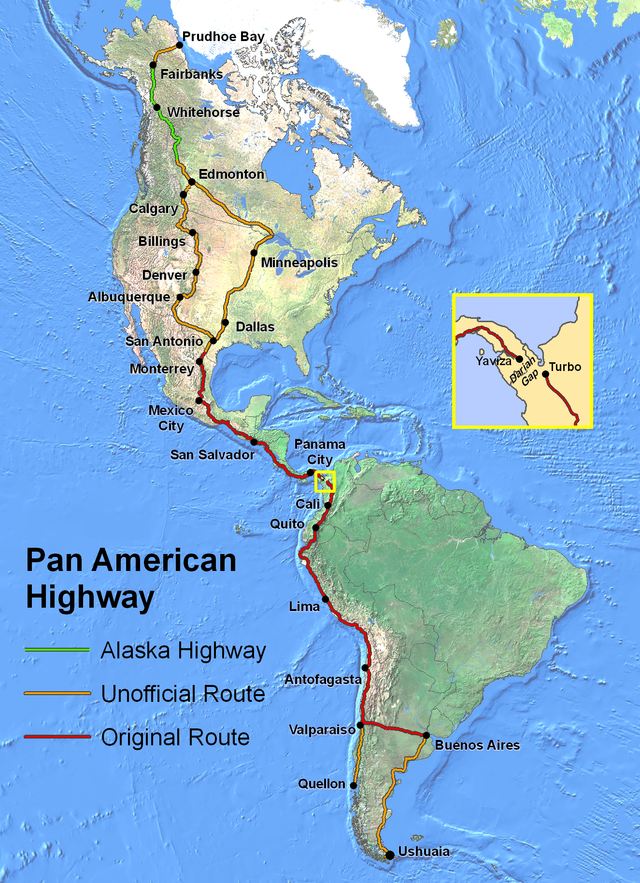 In Costa Rica, the Pan-American is known as the Interamericana, split into two parts: Ruta 1 from the Nicaragua border to San José, and Ruta 2, from San José to the Panama border.

[su_pullquote class=”H2″]Jake Silverstein, writing in 2006, described the Pan-American Highway as “a system so vast, so incomplete, and so incomprehensible it is not so much a road as it is the idea of Pan-Americanism itself”[/su_pullquote]According to Guinness World Records, the Pan-American Highway is the world’s longest “motorable road”. However, because of the Darién Gap, it is not possible to cross between South America and Central America by traditional motor vehicle.

However, thousands of years before the asphalted Pan-American Highway of today a much slower and narrower, highway connected parts of western South America. That road system, now known as the Inca Roads, actually had been started more than a 1,000 years before the short-lived Inca Empire.

The road, called the Qhapaq Ñan (Andean Road System) in Quechua, connects together parts of present-day Ecuador, Peru, Bolivia, Argentina, Chile and a corner of Colombia. The Incas invaded a bit of present-day Colombia near the Ecuadorian border just before their empire collapsed with the arrival of the Spanish conquistadores in 1533.

The Inca roads are something of an engineering marvel for their day, with reinforced walls, paving in many parts and drainage systems. They didn’t need to be smooth, since the Incas didn’t have wheeled vehicles. (But, paradoxically, they did make wheeled toys for their kids). One of the road’s rope bridges, the Qeswachaka, originally built by the Incas, still survives near Cuzco, Peru. Locals tear it down and rebuild it every year.

The eastern route ran high in the puna grasslands and mountain valleys from Quito, Ecuador to Mendoza, Argentina. The western route followed the coastal plain not including in coastal deserts where it hugged the foothills. More than twenty routes ran over the western mountains, while others traversed the eastern cordillera in the mountains and lowlands. Some of these roads reach heights of over 5,000 metres (16,000 ft) above sea level. The trails connected the regions of the Inca empire from the northern provincial capital in Quito, Ecuador past the modern city of Santiago, Chile in the south. The Inca road system linked together about 40,000 kilometres (25,000 mi) of roadway[1] and provided access to over 3,000,000 square kilometres (1,200,000 sq mi) of territory.

Situated between 500 to 800 metres (1,600 to 2,600 ft) above sea level, this monumental road, which could reach 20 metres (66 ft) in width, connected populated areas, administrative centres, agricultural and mining zones as well as ceremonial centres and sacred spaces.

Although the Inca roads varied greatly in scale, construction, and appearance, for the most part they varied between about 1 to 4 metres (3.3 to 13.1 ft) in width.

The Inca used the road system for a variety of purposes. Not only did the road simply provide transportation for people who were traveling through the empire, the road also provided many military and religious purposes for the Inca.

UNESCO just designated parts of the Inca road system as a World Heritage Site. The six nations which proposed the designation hope it will help preserve the road network and its associated resting houses and other infrastructure, which, unfortunately, has fallen victim to agriculture, asphalt and erosion.

- Advertisement -
Paying the bills
Previous articlePolitics and Football!
Next articleOscar Duarte, The First Nicaraguan To Play In The World Cup