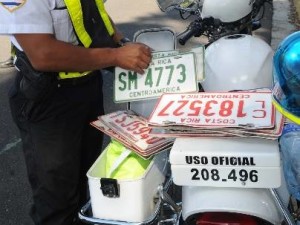 Thousands  of owners of vehicle licenses plates confiscated by the Policia de Transito (traffic police) have until November 1 to claim them or lose them for good.

The Consejo de Seguridad Vial (Cosevi) announced Tuesday that all the unclaimed pairs – almost 10.000 pairs – of metal license plates will be destroyed,.

Carlos Rivas, Cosevi legal director, said that the holding time for confiscated plates has been reduced from one year to six months in order to free up physical space and make room for new confiscations.

“Six months is long enough for an owner to show interest in recovering their plates”, said Rivas.

Rivas explained that many vehicle owners go directly to the registry office to obtain new plates after paying the Cosevi fines, rather than claim the confiscated plates.

QCOSTARICA - The United States presented on Monday a plan to share 55 million doses of coronavirus vaccines worldwide, with approximately 75% of the...
Turrialba