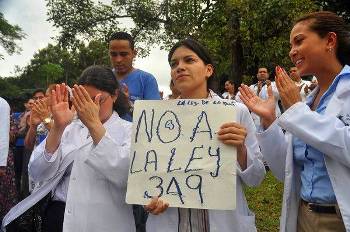 QPanama News – The indefinite public health strike, today in its ninth day, will remain in place until the Panamanian government repeals a law regarding the hiring of foreign doctors, the National Negotiating Medical Commission (Comenenal) confirmed today. 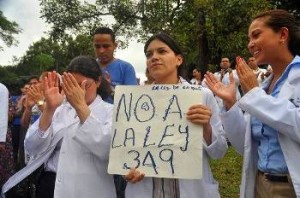 The announcement was made before the media by Fernando Castañeda, leader of Comenenal, and he added that the strike to eliminate legislation that now allows the hiring of foreign health workers, both specialists and technicians, will not be abandoned.

Castañeda said that a dialogue was demanded with President Ricardo Martinelli, who passed a law yesterday despite the strikes, to achieve a resolution of the situation.

He stressed that Martinelli’s statements to justify passing the law, are meaningless for the union because they do not guarantee that public health services won’t be privatized.

Health Minister Javier Diaz said that the text is not explicit abouit privatization and the matter is reduced to a presidential promise. He insisted that the “the word of the President is sacred,” and that there is no reason to continue the strike.

However some union spokespersons have doubts about the president’s promises, explaining that they end up not being met, either through subterfuge or delay tactics.

Given these comments Diaz insisted that there is no reason for the strike to continue because there are no signs nor will there be, of privatizating health services.

Diaz recalled that Martinelli, under legal sanction, had promised a salary raise for Panamanian doctors working in the interior of the country.