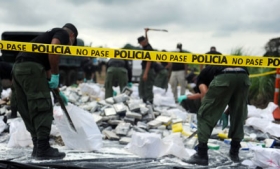 (QPANAMA) Panama has registered a significant increase in drug seizures this year compared to 2012, underling the country’s growing importance to drug traffickers as the region’s cocaine routes continue to shift.

So far this year, Panamanian authorities have seized over 40 tons of drugs — the majority cocaine — compared to 35 tons last year, reported La Estrella. The figures represent an almost 15 percent increase compared to 2012, with more than a month of the year left to go.

The numbers also mark a rebound in drug seizures from 2011, when 39 tons were recovered, although are not yet close to the record 54 tons recovered in 2009.

According to La Estrella, 319 tons of drugs have been recovered in the past 13 years, with almost 36 percent of seizures occurring in the past three years. 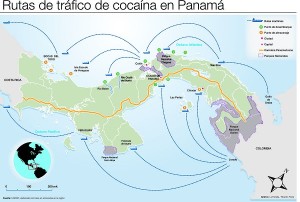 The figures underscore a shift in drug trafficking patterns during that time period, as highlighted in an investigation by La Estrella, with direct shipments to Mexico dropping sharply in favor of routes through Central America and the Caribbean.

As La Estrella points out, the shift has been accompanied by a heavier presence in Panama of foreign criminal organizations, including Mexican cartels and Colombian groups known as BACRIM (from the Spanish abbreviation for “Criminal Bands”).

Panama, sitting at a strategic exit point for South American cocaine, has long hosted transnational organized crime, with lax visa requirements, a thriving sex tourism industry, a welcoming banking sector and a dollarized economy all making the country attractive for money laundering and lavish lifestyles. As outlined by La Estrella, the country is also home to an active contraband trade, facilitated by the Colon Free Trade Zone.

The 57th Front of the Revolutionary Armed Forces of Colombia (FARC) has also long operated in the stretch of dense jungle known as the Darien Gap along border between Panama and Colombia. The strength of this presence is highlighted by the fact that one of the front’s commanders is a former Panamanian policeman, and with the June discovery of Panama’s first known coca plantation, which has been linked to the FARC.

However, since 2007 authorities have documented rising drug trafficking and related violence through the country, and activity from illegal groups appears to have recently accelerated and diversified. Earlier this year, Panamanian officials claimed four Mexican cartels now operate in the country.

Criminal groups dedicated to stealing drug and cash shipments have also emerged, with 40 to 50 now operating in the country, according to La Estrella, while foreign organized crime appears to have spurred the growth of domestic street gangs.