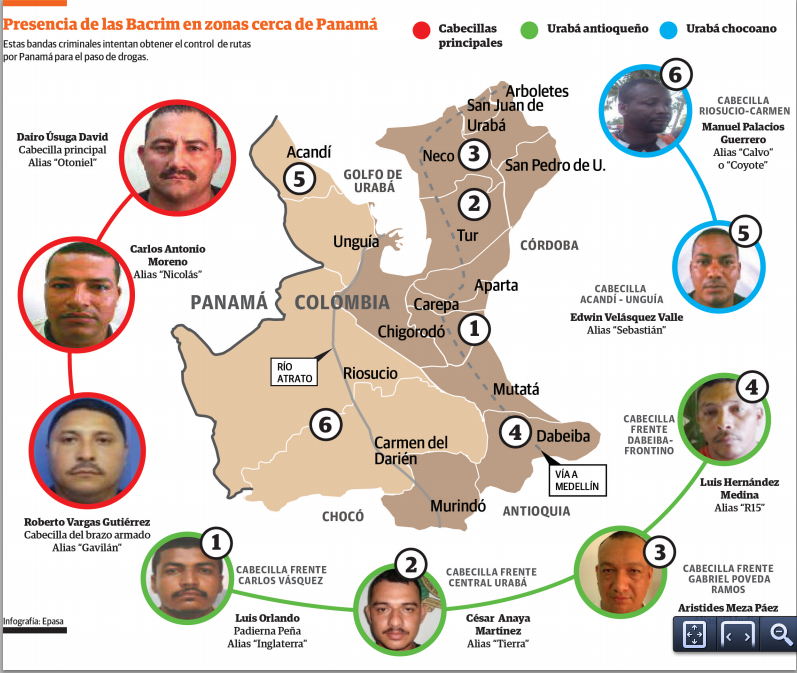 TODAY PANAMA NEWS – Panama’s border control agency has warned that Colombian criminal groups descended from the paramilitaries are increasingly using the country as a trafficking route, corrupting officials and influencing local gangs, according to a report.

Panama America website quoted Frank Abrego, head of border control agency Senafront, as saying that the “highly dangerous” BACRIM groups “seek to enter our territory unnoticed; causing an increase in the trafficking of drugs, people and weapons, as well as … corruption and the mutation of identified local groups.”

A report by the border agency, reportedly seen by Panama America, said the presence of Colombian BACRIM groups (named for the Spanish for “criminal bands”) may be behind a surge in drug-related violence the country has seen over the past few years.

Abrego also reportedly told the site that the BACRIM in Panama operate via the “hormigueo” (ant hill) method, in which individuals transport small drug loads on their backs in groups of 15 to 80 people. Abrego said that the criminal gangs sometimes pass themselves off as members of the Revolutionary Armed Forces of Colombia (FARC) or as government officials.bacrim panama

The incursion of Colombia’s BACRIM groups — which formed following the demobilization of paramilitary organizations in 2006 — into Panama has been reported for several years. These groups include Colombia’s most powerful neo-paramilitary group, the Urabeños, which operates near the border region.

According to Colombian police intelligence sources consulted by InSight Crime, the Urabeños deliver drug shipments to members of the FARC’s 57th Front near the border. The guerrillas then transport the cargo into Panama, where they pass the shipments on to other Urabeños members.

The same source stated that one of the leaders of Medellin’s Oficina de Envigado, Carlos Arturo Hernandez, alias “Duncan” or “Jeronimo,” is currently running operations for the organization in Panama.

Other Colombian criminal leaders have also established a presence across the border. Before he was killed by Colombian police in 2013, a member of the Urabeños’ top command, Francisco Jose Morela Peñate, alias “El Negro Sarley,” relocated to Panama to oversee part of the organization’s operations there. In February 2013, one of the leaders of Medellin’s Oficina de Envigado, Edison Rodolfo Rojas, alias “Pichi,” was arrested in Panama City.

In June, the Senafront arrested a Colombian national and discovered a temporary camp that may have belonged to the BACRIM in Panama’s eastern border region known as the Darien gap, reported El Tiempo.

- Advertisement -
Paying the bills
Previous articleHigh Waves Over 3 Metres Expected in Caribbean Coast; Pacific Coast Not To Be Affected
Next articleThe “Hills” Of Puriscal