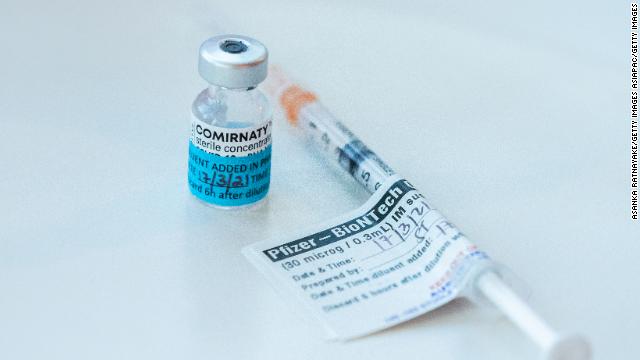 It’s the first look at how long protection for a coronavirus vaccine lasts, and while six months is a modest target, it’s longer than the 90 days of protection been the best estimate offered to date.

On Wednesday, the companies said a small trial of volunteers aged12 to 15 showed 100% efficacy in that age group.

“These data confirm the favorable efficacy and safety profile of our vaccine and position us to submit a Biologics License Application to the U.S. FDA,” Albert Bourla, Pfizer’s chairman and chief executive officer, said in a statement. A BLA is an application for full approval. The vaccine currently has emergency use authorization, EUA, which falls short of full approval.

“The high vaccine efficacy observed through up to six months following a second dose and against the variant prevalent in South Africa provides further confidence in our vaccine’s overall effectiveness.”

The company has been studying the vaccine in more than 46,000 volunteers and has noted 927 cases of confirmed Covid-19.

The most common adverse events were pain at the injection site, fatigue and headache.

“In South Africa, where the B.1.351 lineage is prevalent and 800 participants were enrolled, nine cases of COVID-19 were observed, all in the placebo group, indicating vaccine efficacy of 100%,” the company said.

“Vaccine safety has now been evaluated in more than 44,000 participants aged 16 years and older with more than 12,000 vaccinated participants having at least six months of follow-up after their second dose.”

QCOSTARICA - The number of patients with covid-19 is advancing by...
Read more

QCOSTARICA - It's only the middle of April but it felt like September/October between Wednesday and Thursday, as the rains continued for more than...
HQ

QCOSTARICA - Emily Vega Espinoza, 43, tragically lost her life when the car she was driving crashed head-on into a tanker truck. The incident occurred...
Culture

QCOSTARICA - The building that housed the Key Largo adult entertainment center, in the heart of San José, will have a new facet: it...
National

QCOSTARICA - It is totally false that the Government has changed the sanitary measures, as claimed by disinformation messages circulating on social networks and...
Farandula

Q MAGAZINE - Alejandra Guzmán assures that she is devastated with everything that has been said about the privacy of her family in recent...
Front Page

QCOSTARICA - With the entry of the fifteenth shipment of vaccines against the SARS-CoV-2 virus, this April 13, Costa Rica exceeds one million doses...
Redaqted

QCOSTARICA - KLM announced, this Monday, April 19, that it will reactivate its flights between the Netherlands and Costa Rica, starting on June 29. The...