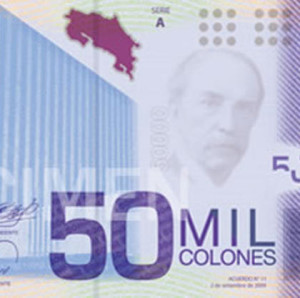 Friday cops raided a San Sebastian apartment equipped with all the machinery necessary to document falsification. And the easy stuff, like those cited above, would only cost 45,000 colones, 65,000 tops.

The cops were acting on tips and the investigation took only about a month and a half, quick work for OIJ. Also arrested were some Nicaraguan illegals in the country, who were clients of the forgers.

When detectives raided the laboratory, they found an unexpected bonus — several clients were awaiting for their falsified papers to be finished. Police say that some of the clients were bus drivers.

But arrested pair are not the only ring to be arrested this year, reported La Nacion. In September, police raided a ring specializing in counterfeiting those new  5,000, 10,000 and 10,000 colon bills issued this year.

Last May, cops grabbed  three gavilanes who were selling false passports, work permits and residency cedulas. (gavilanes is the slang term for folks who lurk around government agencies and offer to speed up or cut through red tape, often scam artists who take the money and don’t help at all.

TODAY NICARAGUA – The Nicaraguan government assures that the imprisoned political opponents detained on charges of “inciting foreign intervention” are “usurpers” financed by the...
Rico's Digest