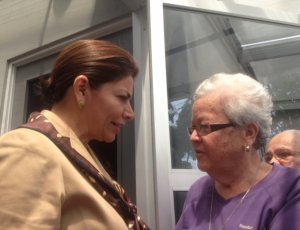 In accordance with recent data of the National Institute of Statistic and Census (INEC), in the last quarter of the year 2012 the unemployment stayed in an inamovible 10 percent in the country.

The  Unimer poll demonstrated that the number of people that considered insecurity like its main concern was reduced.

In 2009, 48 percent were concerned for the crime rate, but from then the following studies began to show a tendency to drop and three and a half years later, only 18 percent of the interviewees manifested great concern for the insecurity.

The poll was carried out between January 24 and last February 4, by means of consultations to 1, 200 citizens in their houses in the whole national territory and has a margin of error of 2,8 percentage points, Unimer specified.

According to Unimer, behind unemployment, the high cost of life and the insecurity,  corruption occupies the fourth place in  concerns and worries of 12.3 percent of the population.

Below these problems and in descending order there is the condition of the economy of the country (9.3 percent) and poverty (6.5 percent), indicates the survey.

The consultation also shows stagnation in the pessimism of the Costa Ricans with regarding the future of the country, although those who say that they are now more optimistic, went down from a 13 to 9 percent in one year, it pointed out.

The poll shows that the group of citizens that considers that Costa Rica is taking a good direction, went down from five percent in October 2012, to hardly 2.5 percent in February this year.