President Solis Says “He Is Not Tolerant” Of Striking Teachers 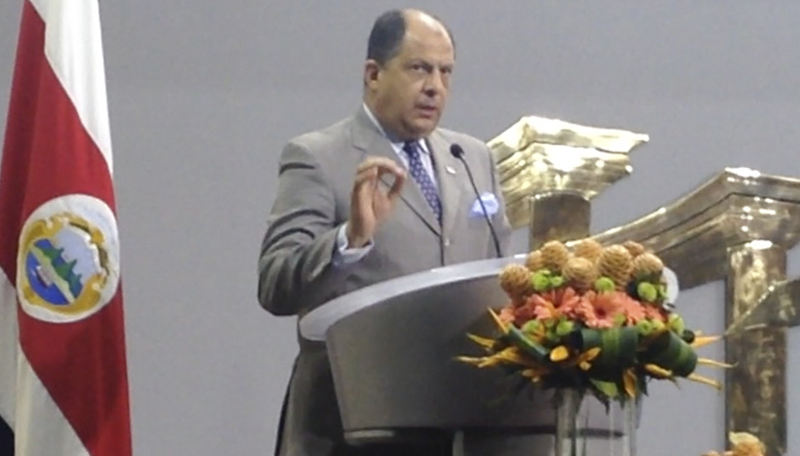 Oh, how different the world looks from behind the desk of a President of a democratic country! When the teachers first walked out of the classroom (May 5) on strike, President Luis Guillermo Solis was a President-elect of a liberal party (Citizen Action–PAC) and declared solidarity with the three unions.

This week, the President accused the unions of “intransigence” for continuing their strike into the third week. In fact he sounded as angry as former Education Minister Leonardo Garnier who accused union leaders of having a political agenda that had nothing to do with the cause of the strike.

In his statements Thursday morning, President Solis did not threaten sanctions against teachers he at first supported and, indeed, it’s difficult to predict what the President could do — although docking the teachers of wages might be a possibility. But Education Minister Sonia Marta Mora said that if teachers returned to classes this week, nothing would be deducted from their pay.

That would entail using labor statutes to declare the present strike illegal. Since his Citizen Action party campaigned on a pro-labor platform, this might well damage its image, even with his own base. On the other hand, he sounded as if he was through asking the unions kindly to end the walkout — as he has done several times lately.

The sticking point is the Magisterio, the base organization of teachers, which surprisingly turned down a draft of an agreement between the unions and the government. The unions had no recourse other than to pretend at least to agree.

“To talk with the Magisterio is useless,” said the President, “because the heads of the unions must take a firmer leadership role that will not allow itself to be manipulated. But another part of the leadership has a spirit of intransigence.”

The Chief Executive said that the leadership misreads the view of Costa Ricans and: “The continuation (of the strike) or its widening is not the responsibility of the government but will not be tolerated. We have the responsibility for preserving the teachers’ working conditions and, at the same time, the rights of the students,” he added.

Wednesday, after the Magisterio had broken off takes with the Education Ministry, the Minister Sonia Marta Mora, angily maintained that she would not resume talks until after the teachers had returned to the classroom. Going by these statements, it would seem that the two sides are as far apparent as the Israelis and Palestinians.

According to President Solis, some teachers are ready to return to the classrooms but some of their leaders have other objectives such as maintaining disorder in the streets with their frequent marches. This is very like the accusation Garnier tossed at the unions and translates to: “I’m mad as hell and won’t take it any longer!”

Comment: While some unions threaten to go out on strike in sympathy with the teachers, all the unions might contemplate for a moment the damage the strike may make on their relations with the liberal parties in congress.

A bill to further liberalize the labor law, allowing persons in certain vital government agencies, such as hospitals and police, to strike is lurking in the files of the Legislative Assembly. Stubborn defiance of the President might very well scuttle that bill.