COSTA RICA NEWS – President Luis Guillermo Solís says he will tell the nation all he has discovered about the former administration in his first 100 days in office report and for now has no plans to open a formal investigation into his predecessor’s tenure. 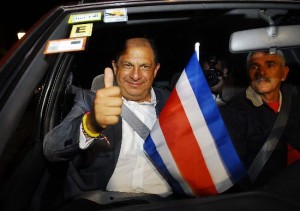 Solís took office on May 8 after winning a landslide victory in the April 6 run-off vote. His first report to the nation is expected on August 15, Mother’s Day in Costa Rica.

The Laura Chinchilla administration caused outrage when the Presidenta flew to Peru on a privae airplane with alleged links to drug trafficking and her first Minister of Finance was forced to resign in a tax evasion scandal.

The President, while in the United States last week, told the media that he doesn’t want to act abritrarily, the process requires a lot of care, but his administration needs to know what challenges they are facing.

In the U.S., Solís met with groups of investors and government officials to try to drum investmenet to spur the country’s economy.

“My government comes at a time when we have an accumulated amount of issues that are pending in the agenda…”, he told Reuters in New York.

Infrastructure has suffered from under-investment, while average growth of 4.3% per year since 2000 has failed to dent a poverty rate of about 20%.

The International Monetary Fund (IMF) has Costa Rica’s gross domestic product growing at 3.8% versus 2.5% for the Latin America/Caribbean region this year.

The projection was given in April, around the time of his election and a time when technology giant Intel 1,500 job cuts in Costa Rica. Intel’s output from Costa Rica accounted for roughly 20% of the country’s exports. On the same day, the Bank of America, announced an equal number of job cuts, closing its Costa Rica operations. Both companies expect the changes, the cutting of 3.000 “qualified” jobs, to be completed by the end of the year.

In respect of infrastructure deficiencies, electricity costs and roads top the list.

The Solís administration is being hard pressed to cut electricity costs in order for the country to remain competitive. Although it has not said so directly, experts tie the Intel departure to the high cost of electricity.

As to the roads, the problem is extremely serious, given the lack of attention to road network maintenance – in particular bridge structures – of past administrations and the alleged corruption within the Ministry of Public Works and Transport (MOPT).

On taxes, President Solís is keeping in line with his promise of no new taxes for at least two years, he reiterated better collection to reduce “scandalous” evasion and stop corruption needed.

“The first transition we want to accomplish is from the sales tax (13 percent)… into a VAT (Value Added Tax), which if successful and I think it will be, will allow us to do the regulation and controlling of evasion”, Solís told Reuters.

QCOSTARICA - The 5.7-magnitude tremor, felt at 5:27 pmon Thursday, occurred in a maritime zone with the potential for stronger earthquakes, explained Ivonne Arroyo,...
Vaccine