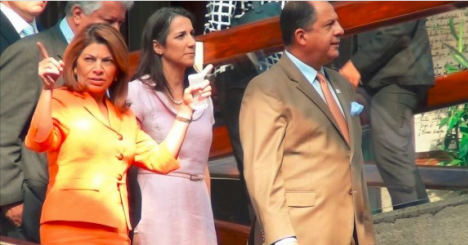 QCOSTARICA – Last, but not forgotten. President Luis Guillermo Solis said he will be visiting former president Laura Chinchilla (2010-2014), at her house in Santa Ana, to discuss te country’s economic situation and tax proposal being promoted the government.

The meeting is set for Monday at 9:00am at the posh residential community of Villa Real.

However, last September 12, Chinchilla was critical of the President, saying publicly we have yet to see the promised changes. The criticism was made during a Partido Liberacion Nacional (PLN) assembly.

Among the comments made by Chinchilla include, “we are looking better than we imagined a year and a half ago…due to circumstances and help of the PLN, however we have not seen the changes the people expected (…).”

It is unlikely that Solis will meet with former presidents Miguel Angel Rodriguez Chavarria (1998-2002) or Rafael Angel Calderon Fournier (1990-1994), for as you will recall both former presidents were embroiled in political scandals and indicted, tried and convicted for corruption and other charges. In the case of Rodriguez, in December 2012, he was exonerated by an appeals court.

Not word either if the President will meet with former presidents Jose Maria Figueres Olsen (1994-1998) or Luis Alberto Monge Álvarez (1982-1986), completing the list of living presidents.