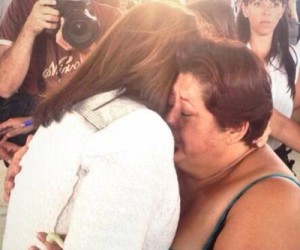 The ceremony was held at 1pm Tuesday in the prison’s gymnasium, where Olga Virginia Bonilla Gómez, Martha Isabel Chávez Benavides and Inés Virginia Quesada Aguilar, were the beneficiaries of clemency.

The three women were in prison for illegal drug related offences.

The pardon was granted on humanitarian grounds, as the three women suffer from some type of disease which was not disclosed to the press.

The Presidenta and the Ministro de Seguridad Publica, Mario Zamora, also took the opportunity to sign reforms to Ley 8204, that lowers prison sentence to women who introduce drugs into prisons.

According to Ministerio de Justicia, women represent less than 10% of the total prison population.

Such pardons are traditional on Mother’s Day that is celebrated every August 15th.

TODAY NICARAGUA – In an unprecedented persecution, the Daniel Ortega regime detained four presidential candidates in one week, a move that is part of...
News

QCOSTARICA - Vaccination centers against covid-19 were transformed this Saturday to be able to vaccinate more people. Universities, civic centers, parking lots and even...
National