Prosecutors have asked the judges of the criminal court (Sala III) to dismiss a complaint brought by opposition lawmaker Patricia Perez against Presidenta Laura Chinchilla for corruption connected with a private jet lent her last May 11 for a jaunt to Peru. (See: Tribunal Absolves Presienta On Private Jet Trip To Peru.) 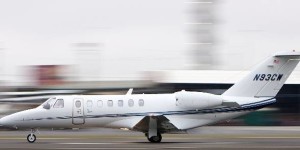 The request by the prosecutors says that, after combing the corruption statutes, they could find none that fit the situation — not illegal enrichment nor any other. The corporate jet was owned by THX oil company whose representative in this country had been linked journalistically (but not by prosecutors) with narcotic traffic.

At the time, Chinchilla, incensed by the scandal, wondered publicly if she would have to schedule her own flights if her staff could not protect her from accepting a ride from a persons under suspicion. Communications Minister Francisco Chacon and Presidential Aide Irene Pacheco both were fired as well as the vice minister of Security.

Both Chacon and Pacheco were along on the trip as well as Foreign Trade Minister Anabel Gonzalez and her husband and Chinchilla’s own husband. The ensuing scandal created a media circus, although most knowing journalists were certain that the charge against Chinchilla would go nowhere.

Most discomfited by the incident was director of the agency for police security and intelligence Mauricio Boraschi, whose position charged him with knowing the precedence of the President’s associates or who was giving the Chief Executive favors. He was forced to resign by the furious President for not knowing of the cloud surrounding THX representative Gabriel Morales.

The scandal deprived Chinchilla of her inner circle of longtime political associates.

QCOSTARICA - The Caja Costarricense de Seguro Social (CCSS) reports that 70.3% of people over 58 years of age, the so-called Group 2 of...
Weather