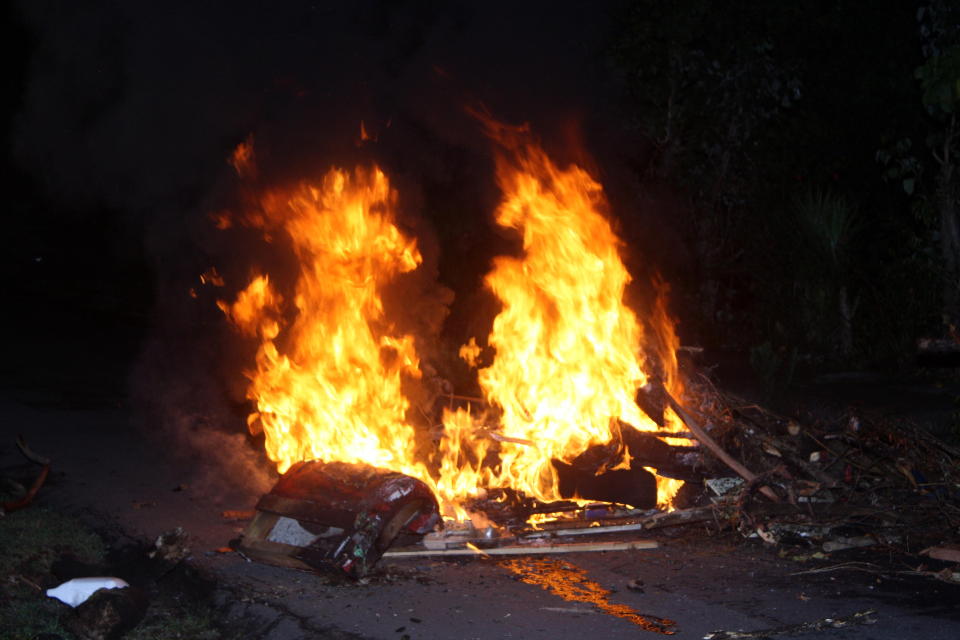 Q COSTA RICA – Judas Night (Quema de Judas in Spanish) is the night before Easter. For some it means a relief from the restrictions imposed by forty days of Lent and the joy of Resurrection Sunday.

“Judas Night will be April 15. Some nasties always build a huge fire in the road in front of my farm and we neighbors have to call 911 and put out the fire. Last year about a dozen police came on motorcycles so they could cross through cafetales and farmland and they said they were all over Alajuela that night,” writes Mitzi.

The tradition of a night of pranks and tricks goes back hundreds of years, to old Spain and the colonization of Latin America and represents punishment for Judas Iscariot, the fallen apostle and traitor who sold out Jesus for thirty pieces of silver. In colonial times the idea was to publicly expose the sins of the local population followed by burning or hanging (and sometimes both) an effigy of Judas as the sinner.

An effigy of Judas, made with old clothes stuffed with grass or hay is an integral part of Judas night even today. In the not too distant past events of Judas Night resembled Halloween and Guy Fawkes night with youths roaming the roads with a Judas and calling on neighbors in the dark of night, sometimes shaking a house to hear the inhabitants scream, or to carry off all the not-nailed-down possessions such as plants, tools, even ox carts, and in one case still remembered, an outhouse to the village square.

Men of retirement age will smile as they relate what a night it was, rolling the ox cart with its sleeping owner under the chicken roost to catch-all the droppings, rounding up a pig to place next to the one-to-many neighbor sleeping it off at the side of the road, or stealing everyone’s front gate and leaving them in a pile for the owners to sort out. Even the time a neighbor came after them with a shotgun merits a grin.

This night of revery was followed by an early Easter morning sound-off as Judases from all the surrounding neighborhoods and barrios, some stuffed with firecrackers were gathered in the soccer field in front of the church and torched just as the sun crept over the eastern horizon. Needless to say, the priests were furious at this demonic display, and so were all the people out looking for their plants, tools, ox carts and outhouses.

In 1870, a book, Testamento de Judas, by the beleaguered parish priest of San Ramon, Father Joaquin Garcia Carrillo, was read to an embarrassed community on Judas Night. Written all in verse as befitting the City of Poets, he exposed the frailties of his parishioners, including names; those who indulge in drinking and card playing, those too miserly or too lazy to support their church, and those who nag and scold. The book became a sensation and continues to be read on Judas Night in some places.

Sad to say, Judas Night is not what it used to be and some young people consider it their night to vandalize and cause damage to property by setting huge bonfires and breaking windows, giving the police and fire departments a very busy time on Judas Night.

But now there’s also an up side to counter balance the bad. In some areas neighbors and community organizations continue the tradition of making and burning a Judas but at an early hour when families can attend, the young and the old, so that the children can learn about this tradition first hand, and the older ones can relive one of the special nights of their youth.

- Advertisement -
Paying the bills
Previous articleWhy is Costa Rica a Top Travel Destination?
Next articleWatch: How a Costa Rican Cooperative Slashed The Carbon Footprint of Coffee

Ruta 27 will be ‘reversible’ on Saturday and Sunday

QCOSTARICA - A claim made by a family against...
Infrastructure