Several high-end tourist resorts in Mexico have been accused of serving their guests contaminated alcohol, leading to unconsciousness, injury, theft and extortion.

In an alarming report by the Journal Sentinel, multiple high-end tourist resorts in Playa del Carmen and Cancun are accused of serving their well-heeled guests alcohol contaminated with a drug, in order to sexually abuse, extort or mug the helpless tourists.

According to the Journal Sentinel, John and Ginny McGowan were at the five-star Iberostar Paraiso del Mar with Ginny’s 20-year-old daughter, Abbey Conner, and 22-year-old son, Austin Conner. The family was hoping to escape the harsh winter in Wisconsin by taking a holiday on the sunny beaches of Mexico. However, their vacation would quickly take a turn for the worse when both Abbey and Austin failed to meet their parents in the hotel lobby on time. The parents would soon learn that Abbey and Austin had been taken by ambulance to a hospital after both were found unconscious in the resort pool.

Mother Ginny notes that everything transpired quickly, and the family is seeking answers after the resort failed to provide surveillance, witnesses or details on what happened to the siblings while at the pool. Austin was taken to the hospital alongside his sister after he was found face down in the pool. Austin says he remembers very little from the ordeal but notes that the pair were drinking. However, he says that he feels their drinks must have been tainted or drugged because he has never blacked out as he did at the Iberostar despite having drunk more in the past.

The accounts of dozens of travelers from the US, as reported by the Sentinel, are backed up by records kept by local ambulance and hospital records, as well as by the hotels themselves.

The attacks took place on the shores of the Caribbean Sea, in resorts in Playa del Carmen and Cancun, both popular vacation areas in the Mexican state of Quintana Roo on the Yucatan peninsula.

Documented in the report were three cases in which drugged or otherwise incapacitated travelers accused local hospitals of engaging in extortion by overcharging them for services following an emergency visit.

Several of the tourists mentioned in the report claimed that they had only one or two alcoholic drinks before losing consciousness, waking up “with no recollection of how they got back to their rooms or to the hospital, or how they were injured”.

Other cases detailed two teenage brothers who woke up covered with mud and with their wallets and cellphones stolen, with no idea how the escapade came to pass; as well as a woman who stated that she was raped and her husband’s hand was broken.

The report also documented the case of a female traveler to one of the resorts accused of participating in the crimes as having a single shot of alcohol and then becoming unconscious, waking up in a hospital.

An alternate theory offered in the report suggested that, instead of an outright local conspiracy to drug and assault guests, some resorts may be attempting to cut costs by cutting the Cuervo Gold with locally-produced hootch.

As KENS5 reports, the common theme among tourists in the area who experience similar incidents is that the tourists are told to go to specific medical facilities with cash. Therefore, some have speculated that the hotels are serving tainted alcohol and working in conjunction with certain hospitals to boost their business. 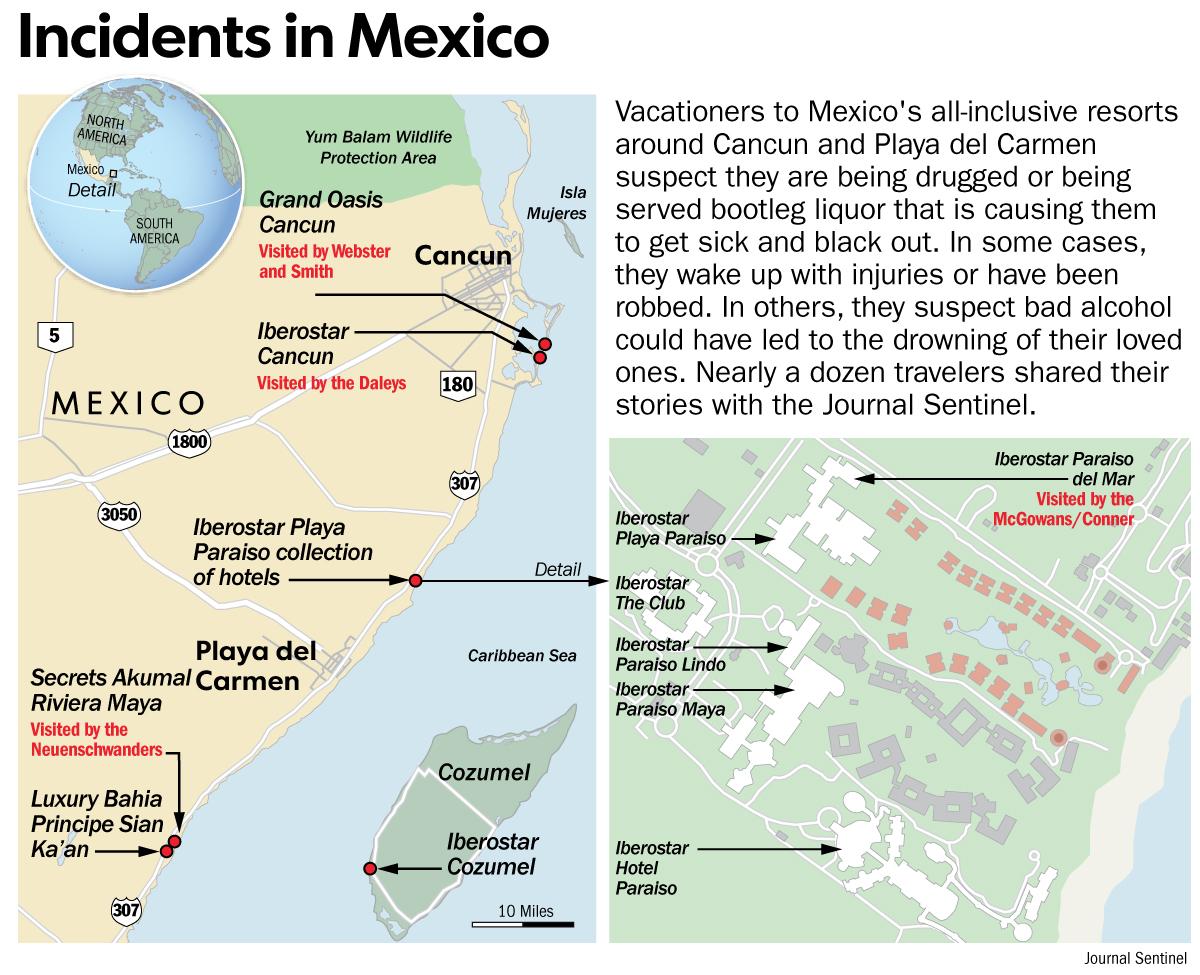 In at least three reported cases, vacationers reported that local hospitals, part of the Hospiten chain, appeared to be gouging them. The hospitals would demand large sums of cash, and one tourist was told to take a cab to an ATM in the middle of the night to pay.