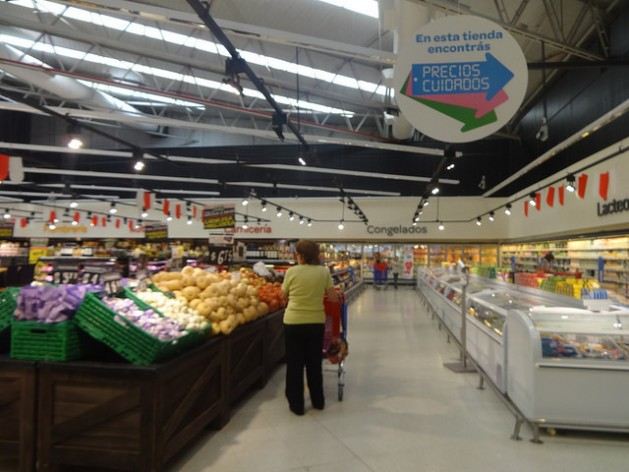 (IPS) – Argentine consumers have responded to calls on social networks to mobilize against price hikes that threaten the country’s major advances towards poverty reduction and greater social equality.

A consumer boycott has had encouraging results, according to some consumer associations and government spokespersons.

The results were not quantifiable, but the campaign not to make purchases for 24 hours on Feb. 7 in supermarkets, appliance stores and gas stations was supported by 280,000 people on internet and visibly emptied many establishments.

“I started to go to different places to check prices. There are enormous differences,” psychologist Ester Vallez told IPS. She said she paid 30 percent more for a key for a lock from one week to the next, something that “obviously affects other products, too.”

“The government must control prices and we should all seek a strategy to exert pressure together,” Javier Sequeira, a maintenance worker who lives in La Matanza, in the west of Greater Buenos Aires, told IPS.

Sequeira’s wages are no longer enough to support his family. He is thinking of joining together with neighbours to buy food in bulk more cheaply at the Central Market.

“If we stop buying some products because they are too expensive, the factories will soon feel the difference. Many people use the dollar as an excuse to take unfair advantage,” said this father of two “with another on the way,” whose annual wage increase has evaporated because of inflation.

The consumer boycott is one of several initiatives called for in the media, including comparing prices, denouncing price increases and checking that products on the Precios Cuidados price watch list are available in stores.

The price watch list is the result of an agreement between the government of President Cristina Fernández and chains of suppliers and traders, to offer food drinks, cosmetics, cleaning, educational and construction products at accessible prices.

Mobilising against speculative prices emerged after the devaluation of the Argentine currency, the peso, which in January alone was devalued by more than 34 percent against the dollar, its largest fall since 2002, triggering indiscriminate price hikes.

In 2013, the official value of the peso fell by 25 percent against the dollar and the parallel peso by 47 percent, according to consulting firms.

“It’s time for all sectors to take their share of responsibility for things to keep working,” said President Fernández, criticizing influential economic interests she blames for speculative attacks and capital flight.

He said that between June and December 2013 companies selling food “had already increased prices by 200 percent,” even for many products that had no imported ingredients.

According to the National Institute of Statistics and Census, inflation in 2013 was 10.9 percent, whereas private consulting firms put it at 28.3 percent.

“At stake is not only speculation and workers’ wages, but the national project and the kind of country we want,” said Mattos.

The choice is between a country at the mercy of the big transnational corporations, or one that is capable of supplying its own basic needs and “joining forces” with the rest of the region “to make progress on social inclusion and reducing inequality,” he said.

Mattos backs popular participation in price watching in supermarkets, because that is where the “consumption pattern of Argentines in the big cities” is set, as well as the creation of “complaints mechanisms that allow sanctions on companies not only in the sales phase but also in production.”

Vallez said the government should “put more people on the street to control prices, and we as citizens should do our part, by not taking things lying down but reporting and not buying products that are overpriced.”

The government has responded with a battery of measures to counteract the results of devaluation and social discontent over its effects on prices.

As well as the Precios Cuidados price watch program it has instituted new social programs like Progresar (Progress), which provides a monthly allowance for unemployed or precariously employed young people aged 18 to 24 to start or complete their studies.

According to the Economic Commission for Latin America and the Caribbean (ECLAC), Argentina has the lowest poverty rate in the region (4.3 percent) and the second lowest extreme poverty rate (1.7 percent), after Uruguay.

In December, ECLAC ranked Argentina as one of the countries in the region that most decreased inequality during the period 2008-2012.

But the loss of value of salaries and purchasing power could reverse those achievements.

“The main source of the reduction of inequality over the past decade was the increase in the component of non-labour income (like subsidies and other assistance programs) in the poorest households, but not improvement in work-related income in the same households,” said Agustín Salvia, the head of the Programa Cambio Estructural (Structural Change Program) at the “Gino Germani” Research Institute of the University of Buenos Aires.

The inflationary spiral will tend to increase poverty, as well as inequality, he told IPS.

This is “precisely because of the impoverishment of wage-earners and non-wage-earners who are least protected by labour regulations,” said Salvia, a researcher for the National Scientific and Technical Research Council (CONICET).

In spite of government moves to neutralize the impact, it will not be able to “prevent a negative effect on workers in informal sectors” and also on pensioners, he said.

“The government must take strong measures to prevent inflation from creating a wider distribution of incomes, by continuing and deepening the existing policies for these social sectors,” Jimena Valdez, an economist and political scientist, told IPS.

In her view, “this entire situation would be exacerbated if there is an inflationary spiral, which is why it is in the primary interests of the government that this should not happen.”

To prevent it, Valdez said, the government could call for a dialogue with the business community and trade unions to discuss labour policies and wage increases. It should also increase the payments made by the social programs in line with inflation.

Salvia said it is “very important to raise awareness and mobilize the public to put pressure on price setters so that there are no excesses.”

However, he pointed out, price movements “will be determined, fundamentally, by factors like the money supply, the level of demand (which is dropping), devaluation and inflationary expectations.”

QCOSTARICA - After years of deterioration and antiquity, work...
Infrastructure