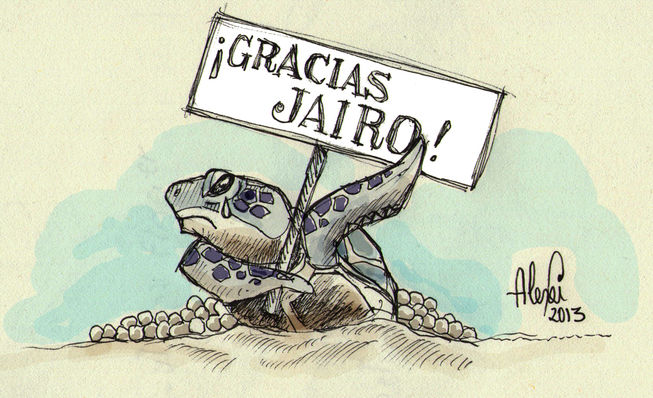 With grave sadness, more than 100 colleagues and family of environmentalist Jairo Mora laid him to rest Sunday. But a sense of repressed anger also attended the funeral — anger that Costa Rican authorities did not heed the warning of the murder victim.

Mora’s nude body with  head wound was found on a Caribbean beach Friday morning after he and three fellow environmentalists were kidnapped by hoodlums.

Update  But shortly after noon Monday, police patroling the same beach where Mora’s bound body was discovered lifely, police  arrested two men with 74 illegal turtle eggs and two firearms A ballistics test will be run on the .38 caliber pistol found on one of the egg thieves.

The same day, police also detained the men and a minor scouting Moin Beach for turtle nests containing eggs valued at 500 colones each. The ATV they were using was confiscated an the minor turned over to Children’s Court officials but the adults were released.

Edwin Cyrus, head of the National System of Conservation Areas (Sinac) spoke for all when he said at the ceremony, “He helped protect turtles and natural resources. We ask authorities for their maximum efforts to catch those responsible for his death.

“This must not stain the image of the country.” Mora was, Cyrus added, not just a colleague but an example for others to cooperate in protecting nature.

This is definitely not what the persons suspected of killing Mora wanted. As drug addicts, the hoodlums who committed murder wanted Mora’s death to frighten off those who would keep those hoodlums from selling turtle eggs to feed their drug addictions.

Erick Gabarrete, an official with the Association of Friends of the Coast and Nature (Amicona) echoed Cyrus’s plea to bring the murderer and his accomplices — at least four lawbreakers wearing hoodies — to justice.

Vigils, demonstrations and profiles on social media expressed the anger and horror of Costa Ricans and demanded of police some answers–and quickly. Alas, that may not happen.

Comment: The Limon area is arguably the most violent in the country. If police inaction in Mora’s case is any example, the police have given up not only protecting nature but also those who protect nature.

Mora’s friend Erick Alguerra, who is left only with a cap Mora wore to remember him, set the record straight. “Jairo and I grew up together. He never had a vice. We began as volunteers together and now we were on salary.” (This blog erroneously called him a volunteer, still.)

And Mora’s aunt, Marina Matute, described the pain: “Jairo should be here with us, protecting the turtles. He didn’t have to die at the hands of criminals.”

As La Nacion expressed it, “Mora’s remains were buried in the Gandoca-Manzanillo cemetery where he was born, grew up and learned to protect the turtles.” It remains for others to take up the torch cruelly wrenched from his hand.

Note: The news of the latest captures by police will undoubtedly not console Mora’s family or friends who cannot help but feel if police in Limon had done their jobs earlier that Mora would still be alive. The arrests merely show how blatant egg traffic has become and how brazen the thieves have become.