At ¢300 colones at a time, users of the San José – Caldera leave behind for Autopistas del Sol some US$4 million dollars monthly. 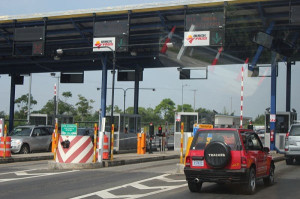 According to figures provided by the Consejo Nacional de Concesiones (CNC), in May a total of 174.588 vehicles crossed the tolls on the concession highway.

Based on CNC figures, most of the vehicles using the highway cross the Escazú station with a a total of 83.961 vehicles a month. The next busiest station is the La Guacima, located in San Rafeal de Alajueal with 23.517 vehicles and third is Cuidad Colon (the exit off the Ruta 27 to Santa Ana) with 17.713 vehicles.

As the numbers show, the majority of vehicles leaving the greatest income for the concessionaire are in Escazú, Santa Ana/Cuidad Colon and Alajuela.

Toll rates adjusted every quarter, based on current economic conditions and set by an agreement between the CNC and the concessionaire.

The Autoridad Reguladora de Servicios Publiclos (ARESEP), the government regular of public prices and services does not take a role in the setting of the rate, as it does with other public services like gasoline prices. According to Carolina Mora, spokesperson for the ARESEP, the entity would only participate if there is a dispute between the CNC and the Concessionaire. Mora explains that the toll rate model are set out in the private contract and out of the reach of the ARESEP.

QCOSTARICA - Osta Rica has been the epicenter of regional diplomacy in recent days. The successive visits of the Secretary of State of the...
Peru