Diego Rodríguez practically spend all day – his working day – Wednesday in his vehicle due to traffic congestion, protests, road closures and delivery trucks parked in the narrow streets of San Jose, all contributing to the nightmare lived daily by drivers. 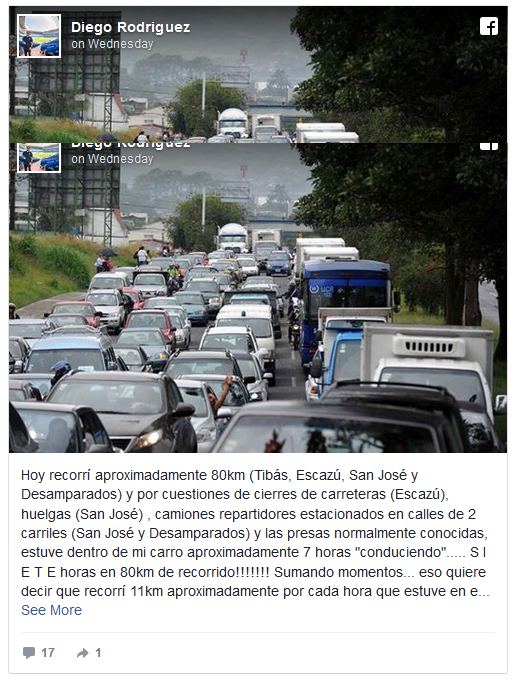 According to his Facebook post, it should have taken him not more than 2 hours to his typical run, from Tibas through the streets of San Jose and his final destination of Desamparados.

“I spend about 7 hours in my car ‘driving’. SEVEN HOURS to drive 80 kilometres. It is to say, I drove at an average speed of 11 km/h,” posted the young man.

In addition to the typical congestion, Diego met up with the bad luck of teachers on the streets in protest and downed power lines in San Rafael de Escazu.

“We’re really screwed,” said the driver in sharing his experience on the Crhoy.com on Facebook page.

Another poster, Adriana Viquez, an Instituto Costarricense de Electricidad (ICE) employee, said she prefers to walk from La Sabana to Heredia to spending four hours in her car daily.

For example, on the Ruta 27 from the Cuidad Colon tolls (Piedades de Santa Ana), traffic now starts building up around 7:00am. It will take almost one hour to travel from Santa Ana to Paseo Colon, almost half of that time from Santa Ana to the Escazu tolls. The typical travel time in the evening, between 10pm and 5am is 15 minutes (at the posted speed limits). In the afternoon, drives face the same traffic conditions on the driver back west.