QCOSTARICAQCOSTARICA - CREDIBLE AND INDEPENDENT SINCE 2012
HomeTravelSix airlines have requested permission to fly from U.S. to Costa Rica
NewsTravel

Six airlines have requested permission to fly from U.S. to Costa Rica

(QCOSTARICA) The General Directorate of Civil Aviation confirmed that six airlines have applied for permits for flights from the United States to Costa Rica, after the re-opening of the airports on August 1. 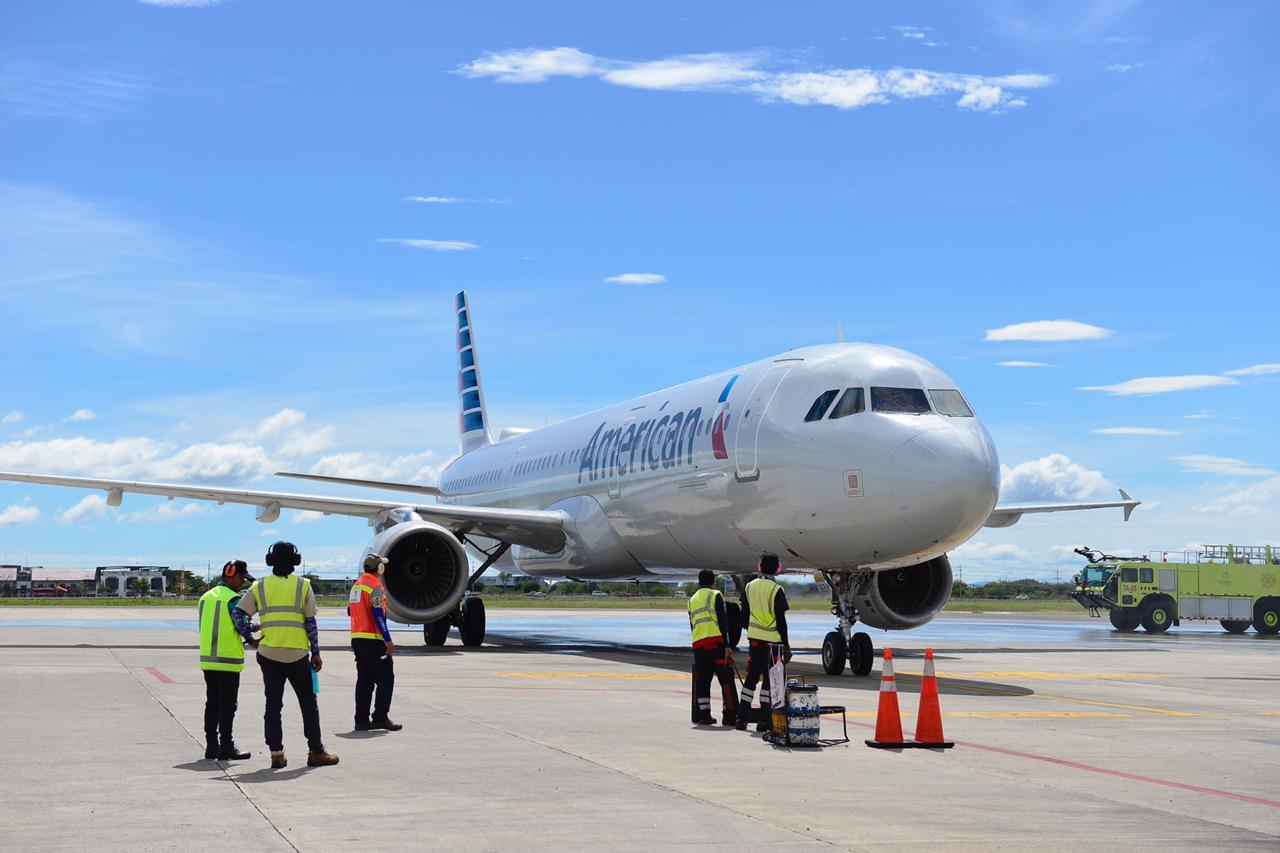 Álvaro Salas, director of Civil Aviation, confirmed that all processes are under review but subject to the central government allowing commercial flights from the United States to enter.

As of August 1, international passenger flights are authorized to arrive at Costa Rica’s international airports from the European Union (Schengen zone), the United Kingdon and Canada.

The authorization limits commercial flights to five per week: three from Madrid, Spain on flights operated by Iberia on Mondays, Wednesdays, and Fridays; and two flights from Frankfurt, Germany operated by Lufthansa, on Wednesdays and Saturdays.

As of September 8, Air Canada will resume flights to the Daniel Oduber with a weekly flight on Tuesdays, and, as of September 12, Saturdays from Toronto to the Juan Santamaría.

For now, it remains in doubt when air travel to and from the United States will be authorized since. Last Thursday, the United States Department of State itself published a global travel alert by which it advises against U.S. citizens to travel to 20 nations of Latin America and the Caribbean, including Costa Rica.

However, Gustavo Segura, Minister of Tourism, declared on August 5 at a press conference that “the United States is the closest market in terms of purchasing power and that, traditionally, with most visits to Costa Rica.”

Segura said that there is a constant analysis of the optimal time to resume, but he did acknowledge that this examination includes possibly allowing flights from some specific U.S. cities.

The U.S. airlines had already submitted their plans for flights to Costa Rica coming from cities such as Miami, Houston, Newark, Orlando, Los Angeles, and Fort Lauderdale.

American Airlines, for example, would have flights the Liberia airport from Miami on Mondays, Thursdays, Fridays, Saturdays, and Sundays.

For the San Jose airport, American proposes to resume daily repatriation flights as of August 20 to Houston (Texas) and to operate regularly starting on September 9 to Miami, on Mondays, Thursdays, Fridays, Saturdays and Sundays.

In the case of  the Juan Santamaría, it proposes daily flights to and from Houston starting on September 2 and leaving on Thursdays, Fridays, Saturdays and Sundays to and from  Newark

This airline announced that it will resume operations when indicated by the Costa Rican authorities with flights on Mondays, Wednesdays, Fridays, and Saturdays to and from the Daniel Oduber and Angeles (California). In the case of the Juan Santamaría, it would be a flight on Saturdays.

The low-cost airline plans to return to Costa Rica as of November 1 with a daily flight only from Daniel Oduber airport.

This other low-cost airline proposes, starting on October 7, daily flights between San Jose and Orlando, Florida.

The low-cost carrier foresees flights from September 1 to “different destinations in the United States and Mexico via Central America,” as proposed to Civil Aviation. The airline has yet to define the frequency.

This British airline already has the authorization to fly to Costa Rica, but, won’t be until October 27, with two weekly flights between San Jose and London, on Wednesdays and Saturdays.

The requirements to enter Costa Rica are as follows: 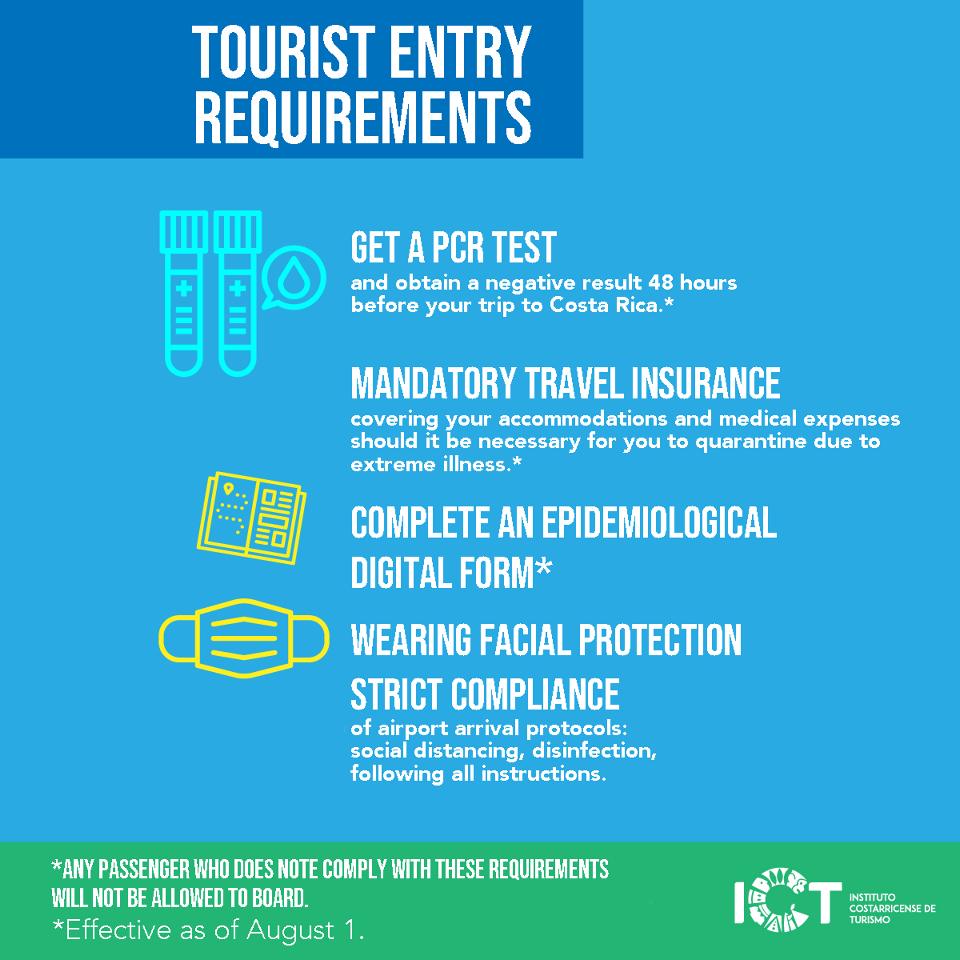 Who can enter Costa Rica?

Costa Rica’s air borders are opened solely to travelers coming from Canada, the EU (Schengen zone), and through the Juan Santamaria or Daniel Oduber airports, until August 31st, 2020.

Travelers of nationalities other than the authorized travel from countries must have been in these countries for at least 14 days prior to travel.

For example, while commercial flights from the United States are not authorized, there is no ban on U.S. citizens traveling to Costa Rica, if they have flown to say Canada or Britain and have spent there 14 days prior to travel to Costa Rica.

It is not valid that the passenger only transits through the authorized countries to reach Costa Rica.

Until August 31, entry to Costa Rica from unauthorized countries, say coming on a private flight say from Mexico or repatriation flight from the United States, only Costa Ricans or legal residents (who did not leave Costa Rica after March 24) can enter; who will not be required to have travel insurance or the PCR test.

The information received thus far from authorities is extremely confusing and contradicting.

Previous articleAccused of drowning a Mexican tourist in Cóbano acquitted
Next articleCOVID-19 in Costa Rica: 636 new cases; changes in alert of several cantons

QCOSTARICA - Starting this Friday, and for 10 days, the health...
Read more
- paying the bills -