Smartphone addiction’ seems to only be getting stronger

QTECH – When was the last time you were in a restaurant or at the mall and everyone was talking to each other instead of being on their smartphone? When it comes to our smartphones, we seem to be more addicted than ever. 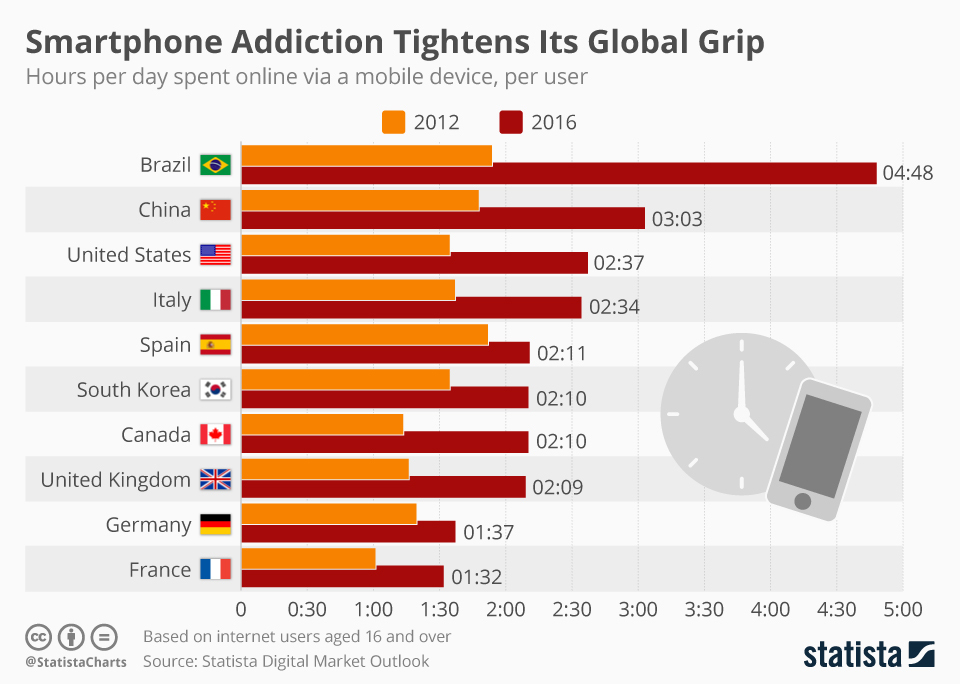 Even as the tech industry is trying to figure out what a post-smartphone world will look like, smartphone users are spending more and more time with their handsets.

Indeed, in various countries around the world, smartphone users last year spent at least an hour a day, on average, glued to their devices — and often much longer, according to research from Statista.

These numbers are even more telling when you put them in context. In all of the countries Statista examined, the amount of time users spent on their mobile devices has gone up since 2012.

In the US, for example, the average smartphone user spent an hour more on his device last year than he did four years earlier.

With smartphones becoming more powerful and able to do more things, it makes sense that people would spend more time on them. Even with all the hype surrounding AI, augmented reality, and other futuristic tech, it’s good to remember that many of us still live in a smartphone world.

QCOSTARICA - Sunday night, 432 of the 1,188 covid patients in hospital are in Intensive Care Units (ICU), after suffering complications from covid-19. In the...
Coronavirus

Slots are the most popular category in any casino. Gambling websites feature hundreds of these games, simplistic and elaborate. Reel symbols range from cherries...
Health

QCOSTARICA - The Covid-19 infection rate in Costa Rica dropped, but not enough to reduce the rate of infection. While the indicator stands at 1.32,...
Vaccine

QCOSTARICA - The landing of two separate and independent shipments of covid-19 vaccines this week, one from Pfizer and the other from Astra Zeneca,...
Health

QCOSTARICA - Costa Rica reported this Thursday the highest number of deaths associated with covid-19 in a single day, since the start of the...
Health

QCOSTARICA - The Government of Carlos Alvarado confirmed on Friday that it does not plan to announce the expansion of the restrictive measures that...
Business

QCOSTARICA - 2020 was marked as a complex year worldwide due to the Covid-19 pandemic, however, the following are entrepreneurs who were not only...