So what is so special about the iPad Mini?

With almost no fanfare, save for a full page ad on Tuesday, the iPad Mini has been selling out like fresh bread. Both the iCon and iShop report out of stock, as customers gobble up the latest entry by Apple. 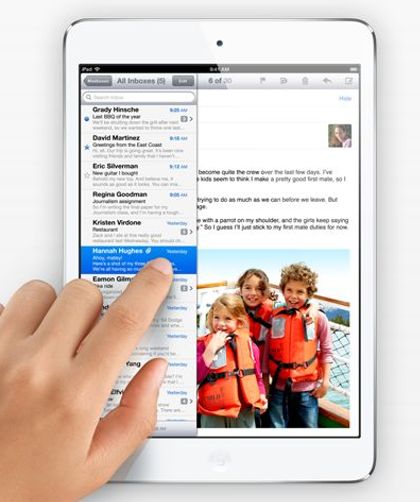 At the iShop in Escazú (Plaza Avenida), the Mini starts at US$449 for the 16GB WiFi version, while at the iCon in Multiplaza Escazú the price starts at US$460.

The iShop was out of stock for the basic version yesterday, but did have stock of the 64GB and 4G cellular versions. At iCon they were completely sold out, with new stock expected in about a week.

Stock of the full size iPad, both the iPad2 and iPad Retina is plentiful at both iCon and iShop. Pricesmart now also carries the iPad2.

So what is so special about the iPad Mini?

According to Apple, there’s less of it, but no less to it. The Mini is everything an iPad is, but in a smaller size, a size that fits into one hand. And its fast.

I had a chance to play (test) one and it is truly amazing, beat out any other tablet out there.

For heavy users, the battery has a 10 hour life, it comes with nice apps such as FaceTime and iSight cameras. And did I say you can hold it in one hand?

Colours are vivid and text is sharp on the iPad mini display. But what really makes it stand out is its size. At 7.9 inches, it’s perfectly sized to deliver an experience every bit as big as iPad.

And, with advanced Wi‑Fi that’s up to twice as fast as any previous-generation iPad and access to fast cellular data networks around the world, iPad mini lets you download content, stream video, and browse the web at amazing speeds

In the end, if you are a serious tablet user, iPad Mini is the only way to go. Fast, powerful and small. But big enough to stand up to the bigger iPad.

QCOSTARICA - The pandemic caused by Covid-19 fuels the strategy of positioning Costa Rica as a world destination to develop wellness tourism, since travelers...
Corrupion