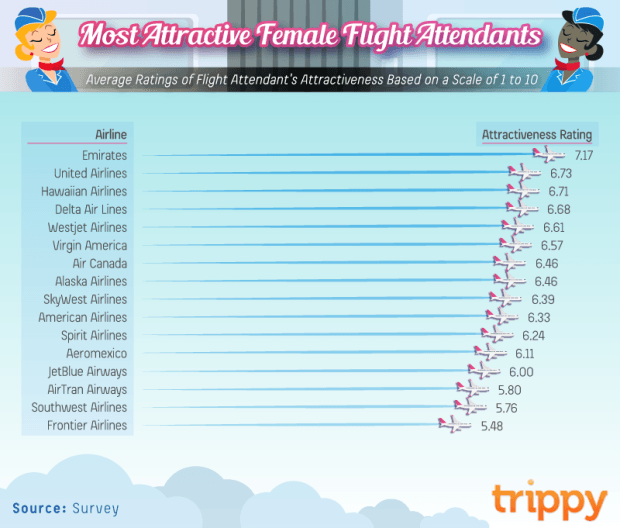 (Q TRAVEL) When looking to book a flight, 95 percent of us focus on one thing, the price. But, thanks to a new survey from Trippy, via Maxim, maybe it’s time to just start using the airline with the sexiest flight attendants, because we now have the answer.

In a new survey, Trippy asked over 2,000 flyers to rank the attractiveness of flight attendants on the scale of 1 to 10.

Here are the results.

As the chart shows, Emirates attendants’ finished tops, averaging a solid 7.17 out of 10. United came in second with a  6.73. Alaska Airlines find themselves in the middle of the pack with a 6.46 rating. Frontier is at the bottom with a 5.48.

Canada’s Air Canada and Westjet placed in the top half, Westjent ranking a 6.61 and AC a 6.46.

We assume that the list “sexiest” applies to women flight attendants, the survey does not differentiate between sexiest female and male attendants.

So, will you use this as a basis to book your next travel plans? Probably not. Use the comments section below or post to our official Facebook page for your thoughts.