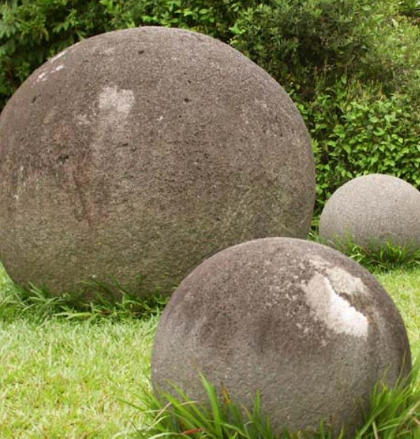 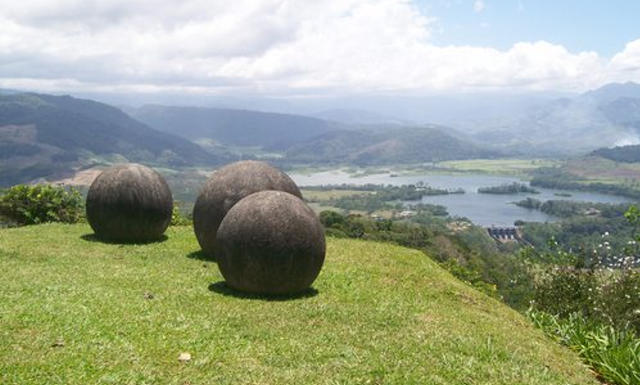 The Parque Arqueológico Las Esferas, located in the Osa, has been officially entered as a candidate to be declared a World Heritage site.

Presidenta Laura Chinchilla said on Friday that the United Nations agency, UNESCO, accepted the declaration and will start the process that will take about year, with the vote coming in mid 2014.

The stone spheres (or stone balls) of Costa Rica are an assortment of over three hundred petrospheres in Costa Rica, located on the Diquís Delta and on Isla del Caño. Locally, they are known as “Las Bolas”.

The spheres are commonly attributed to the extinct Diquís culture and are sometimes referred to as the Diquís Spheres. They are the best-known stone sculptures of the Isthmo-Colombian area.

The spheres range in size from a few centimetres to over 2 metres (6.6 ft) in diameter, and weigh up to 15 tons. Most are sculpted from gabbro, the coarse-grained equivalent of basalt. There are a dozen or so made from shell-rich limestone, and another dozen made from a sandstone.

The stones are believed to have been carved between 200 BC and 1500 AD.

Myths
Numerous myths surround the stones, such as they came from Atlantis, or that they were made as such by nature. Some local legends state that the native inhabitants had access to a potion able to soften the rock. Research led by Joseph Davidovits of the Geopolymer Institute in France has been offered in support of this hypothesis, but it is not supported by geological or archaeological evidence. (No one has been able to demonstrate that gabbro, the material from which most of the balls are sculpted, can be worked this way.)

In the cosmogony of the Bribri, which is shared by the Cabecares and other American ancestral groups, the stone spheres are “Tara’s cannon balls”. Tara or Tlatchque, the god of thunder, used a giant blowpipe to shoot the balls at the Serkes, gods of winds and hurricanes, in order to drive them out of these lands.

It has been claimed that the spheres are perfect, or very near perfect in roundness, although some spheres are known to vary by 5 centimetres (2.0 in) in diameter until 257 centimetres (104 in). Also the stones have been damaged and eroded over the years, and so it is impossible to know exactly their original shape. A review of the way that the stones were measured by Lothrop reveals that claims of precision are due to misinterpretations of the methods used in their measurement. Although Lothrop published tables of ball diameters with figures to three decimal places, these figures were actually averages of measurements taken with tapes that were nowhere near that precise.

With notes from Wikipedia.