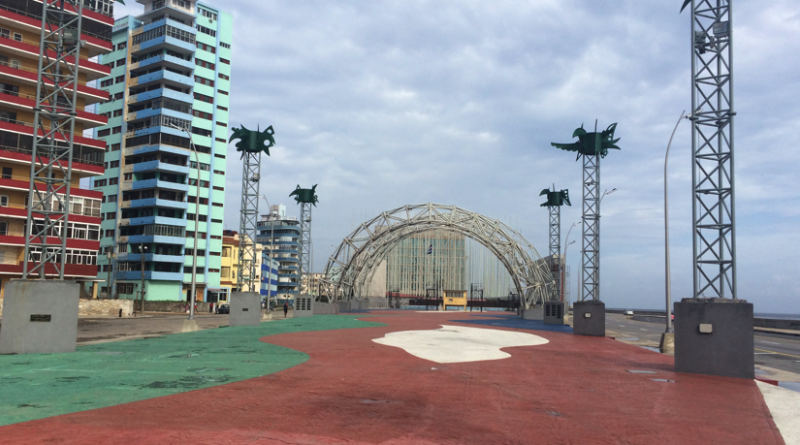 On January 3, 1961, three United States marines stepped outside the Cuban Embassy in Havana to lower the American flag. This act carried momentous implications. The flag was never raised again. Earlier that day, President Dwight Eisenhower officially closed the embassy and cut formal diplomatic ties with the island nation amidst mounting tensions with the new revolutionary government led by Fidel Castro.

The empty flagpole has stood alongside what had become the U.S. Interest Section as a subtle reminder of the broken ties between Cold War foes. When the embassy closed, many, President Eisenhower included, did not expect the freeze in relations to last as long as it did. “It is my hope and my conviction,” Eisenhower said on January 3, 1961 “that in the not too distant future it will be possible for the historic friendship between us once again to find its reflection in normal relations of every sort.”[1] Today, 54 years later, those same marines accompanied Secretary of State John Kerry and other U.S. delegates to see Old Glory rise on the Havana waterfront once again.

Following a courageous decision by the Obama Administration to rejoin relations broken long ago, Secretary Kerry traveled to Cuba to personally oversee the official transition from interest section to embassy. The American seal and a sign will adorn the outside of the reopened embassy.

Yet, despite the apparent thaw, there are still reminders of past scars. There is no symbol more ubiquitous than the Plaza of Anti-Imperialism and the Mount of Flags.

Opened in April 2000, the Plaza features three steel arches that are a tribute to combatants against global imperialism. Familiar names such as Frederico Engels, Vladimir Lenin, and Ernesto “Che” Guevara appear on plaques that decorate the foundation of each arch.

At the end of the plaza a tribute to Cuba’s national hero, José Martí, stands tall. Martí, the leader of the Cuban independence movement against imperial Spain in 1895, points menacingly at the building that is now officially the U.S. embassy in Havana. In his arms he holds a child; a symbolic representation of the young Cuban nation he helped to create. Martí shields the child from imperialism—a clear message.

In 2006 Castro erected el monte de las banderas, a mass of 138 flagpoles, each 20 meters high. Another piece in a petty propaganda war provoked by President George W. Bush and the U.S. Department of State, the flagpoles were intended to obscure an electronic ticker on the uppermost floors of the edifice from passing motorists and pedestrians along the Malecón—Havana’s oceanfront drive.

The ticker, fashioned by the Bush Administration in an effort to supersede government censorship on the island, featured anti-Cuban slogans and quotes from American heroes calling for democracy.

Though the Obama Administration sensibly removed the ticker in 2009, the flagpoles and plaza remain. Such startling symbolism will be difficult to ignore as officials from both states attempt to normalize relations. Beyond the pomp and circumstance surrounding the event, such durable elements prove that relations are anything but normal.

After inaugurating the reopening of Cuba’s embassy in Washington earlier this summer, Cuban Foreign Minister Bruno Rodríguez Parrilla underscored the many barriers that still remain. Rodríguez made clear that true normalization is impossible as long as the embargo on the island remains U.S. law.

Though President Obama has eased some restrictions, only Congress can remove the remaining vestiges of the Cold War relic, an unlikely possibility within the foreseeable future with Republicans controlling a majority in both chambers.

Regardless of lingering mistrust and uncertainty, Kerry’s visit represents one more remarkable step toward peace following more than five decades of diplomatic enmity.

“The time has come for us to move in a more promising direction,” Secretary Kerry said at the ceremony this morning, ushering in a “truly historic moment” in diplomatic history.

By: Rob Craven, Research Associate at the Council on Hemispheric Affairs. Article originally appeared at Coha.org

QCOSTARICA -  In yet another system-wide failure in the immigration check-out, passengers looking to leave Costa Rica Monday morning by way of the Juan...
Rico's Digest