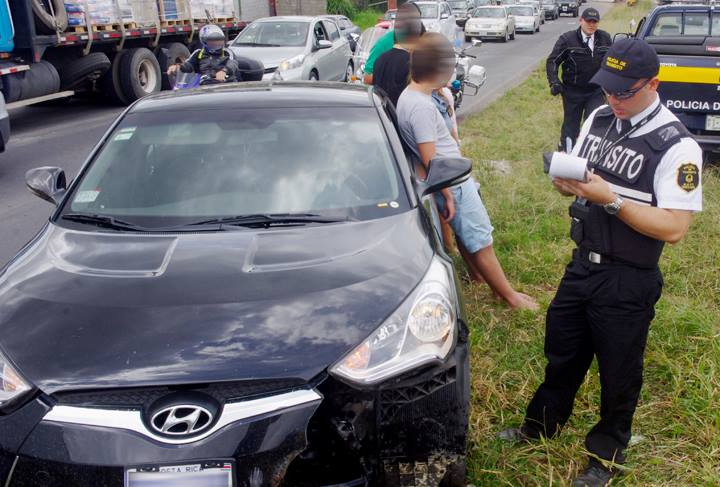 QCOSTARICA – Before getting behind the wheel of your vehicle today, connect to the internet, visit the MOPT website, turn on your printer and print out the “minor accident” (Delcaracion de Accidente de Trnasito Menor) report form.

Ideally, drivers should be printing and carrying the form in their vehicles, according to Deputy Minister of Transport, Sebastian Urbina.

By a decree published in La Gaceta last September, starting on January 7, 2016, drivers involved in a minor accident – basically an accident where there is  only damage to the vehicles, no personal injury or worse, fatality and the vehicles do not required to be towed (they can leave the scene of the accident under their own power) – can be reported using the form and not have to wait for a Transito (traffic inspector) to show up at the scene.

The objective is to reduce traffic congestion caused by waiting for the traffic police and insurance adjuster at the scene of a “fender bender”.

Fender benders are common in Costa Rica and are a major source of traffic congestion, especially in the oversatured roads of the greater metropolitan area.

Between January and October of this year, the Policia de Transito attended 70,179 taffic accidents; on average an accident occurring every six minutes.

In the event of a minor accident, the document can be filled in by the parties involved when there is a mutual interest to reconcile. Urbina stressed, in the reconciliation, the parties agree to the value of the damage and committ to pay for damages. The report can include photos or videos of the accident.

Important to note here, ALL PARTIES (drivers) must be in agreement and sign the completed form, otherwise a traffic official has to be called to the scene.

Urbina explained that, after signing the form, if one of the parties decides to breach the agreement, those involved will then have to resort to the relevant courts, where they can present the signed agreement as evidence.

In addition, the parties involved in the collision DO NOT have to have insurance.

QCOSTARICA -  In the worst of the rainy season,...
Redaqted