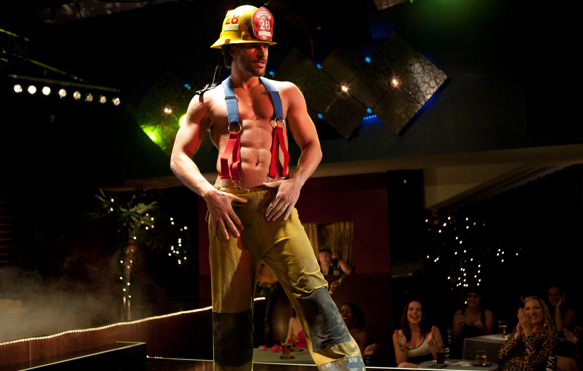 As evidenced by the recent media coverage of the Summer Olympics in London and films like Magic Mike, directed by acclaimed filmmaker Steven Soderbergh, the male physique is becoming sexually objectified by adoring women -including liberated Ticas. Costa Rica may seem like an unlikely place where women will gather in groups to gawk at, and very often grab a handful of, masculine hunks wearing nothing more than G-string underwear; however, that seems to be a hot entertainment option for divorce parties.

Morals and attitudes are changing in Costa Rica, and a few years ago a divorce was no reason to celebrate. Ticas were mostly resigned to wallowing in pity, or in some cases expressing quiet relief, but these days a divorce in Costa Rica offers a chance for women to get together in support of their disjointed friend, and enjoying the company and performance of a male stripper. A lengthy report written by Arturo Pardo in the Sunday Magazine of La Nacion earlier this year introduced many readers in Costa Rica to the world of “maripepinos”, the buff and athletic male dancers who are hired for events such as bachelorette parties, birthdays, private engagements, divorce celebrations and even quinceaneras (a Latin American rite of passage for young ladies who turn 15 years old).

The report in La Nacion, which was titled “Fantasy in Underpants“, focused on the life of Mr. Palacions, a Panamanian male stripper who goes by the stage name of Doggi. Mr. Palacios, who is powerfully built and wears his hair in long braids, is not just a dancer. He is an entrepreneur who sees opportunity in the burgeoning sexual liberation of Ticas. He offers a suite of adult entertainment services in Costa Rica to the women who can afford them. Speaking to La Nacion, Mr. Palacios explained that he carries two cell phones at all times, one acts as his business line while the other is personal. His business phone rings constantly while his personal line is mostly quiet. Mr. Palacios confesses that many of the calls and messages are very sexually suggestive and they are from women who become fans of his work.

Some people think that the term maripepino is a crude portmanteau because of the syllables that make up the word “pepino” (cucumber in Spanish), but that is not the case. The name derived from a famous vedette (female bombshell and sexual icon) named Maria Jose who went by the stage name “Maripepa.” The maripepino profession began a couple of decades ago in Costa Rica, when a nightclub impresario in Tibas came up with the concept of offering male revue matinees to women in San Jose. These matinees were solely advertise by word of mouth, and at some point attracted 600 Ticas who squeezed into a tiny nightclub and crowded the stage to see nearly naked and oiled-up men twirl before them.

The television news media brought the world of maripepinos to Tico households, and at the beginning of the 21st century they were being contracted for private performances. According to Mr. Jimenez, a Tico male stripper who goes by the stage name of Hellboy, when Ticas are left to their own devices they become completely uninhibited. Mr. Jimenez explained to La Nacion the risks of his trade:

Besides taking his clothes off and getting very close to the women he is performing for, Mr. Jimenez is routinely felt up, scratched, and sometimes has to struggle to keep his tight underwear on. He starts his routine dressed in costume; which is often the iconic occupational uniform worn by policemen and construction workers. As he sheds garments, he worries that the assembled women may want to keep them as souvenirs. Mr. Jimenez may be called upon to do certain moves like the “magic towel”, the wheelbarrow and the enigmatic-sounding “inverted helicopter.”

It is unclear if maripepinos are ever contracted for a Mother’s Day celebration in Costa Rica, but Mr. Palacios recalls that once a boyfriend disrupted a bachelorette party, became enraged at the maripepino’s presence and waited for him with a machete in hand. Fuerza Publica had to be called in. The compensation can be worth some of the risks: a short performance can net 25,000 colones (about $50), while a full hour might bring in $150. The worst downside, Mr. Palacios explains, is coming back home from a gig and explaining to his girlfriend the red hand imprints on his buttocks.

- Advertisement -
Paying the bills
Previous articleQTip: How To Swim With Sharks
Next articleFidel Castro slams rumors about his health