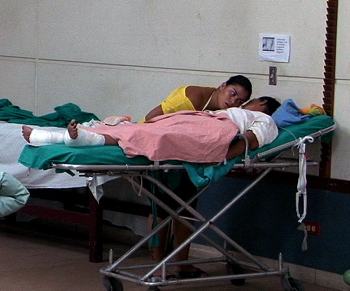 The bacteria Clostridium, a genus of Gram-positive bacteria, belonging to the Firmicutes, an organism that produces botulinum toxin in food/wound and can cause botulism, has raised the alert at the San Juan de Dios hospital after eight cases were reported in the last two weeks.

The normal is six.

In 2009, the downtown San José hospital had a similar outbreak. Hosptial officials say the current situation cannot be compared to the 2009, for now there is only an alert for the possible occurrent of more cases.

Moreover, they insist that the bacterium is present in all medical centres.

The hospital activated a preventive protocol that involves isolation of the cases, reinforcing hygiene such as hand washing, disinfection of the affected areas and the restriction of visits to patients.

Hospital authorities say that for the moment the situation is under control.

- Advertisement -
Paying the bills
Previous articleStop Being A “Nini”?
Next articleBrownouts “Normal” For Start of Rainy Season