Stupidity? Ineptitude? Or Both?

NewsFront PagePolitics
By Rico
16 May 2013 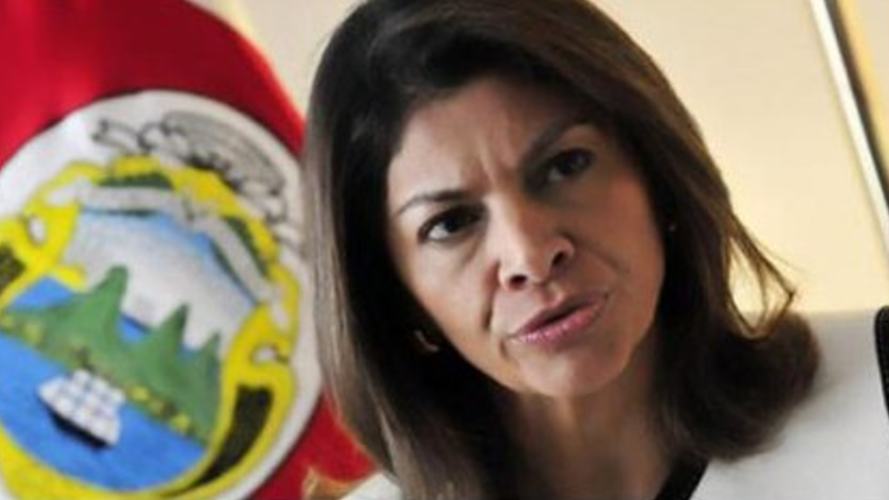 The question being asked by many today is how could Presidenta Laura Chinchilla be so stupid or she inept in taking a flight on a private jet owned someone with alleged links to the drug trade?

Since Saturday, when we learned that the Presidenta flew to Peru on a private jet owned by a foreign company, the situation had gotten worse with each passing day.

On Monday, the government tried to play down the situation, spinning it from the point of view that this, the borrowing of planes, is business usual since the President doesn’t have her own plane,that the Presidenta would pay for the expense out of pocket and so on.

On Tuesday we learned more to the story that had quickly become a scandal for Presidenta Chinchilla and her government.

On Wednesday, Communications Minister, Francisco Chacón, stepped down taking the full blame for what had happened. and an investigation was underway by the Attorney General’s office into possible violation of the law by government officials and the Presidenta herself.

By Wednesday and This morning, the story had taken an whole new proportion, it had left Costa Rica’s borders and had gonve viral, reaching the international stage.

Quickly the Presidenta’s jaunt made headlines in online news media from Mexico to Colombia to Spain and many other parts of the world, all with one common message, “Costa Rica’s president takes narco flight”. 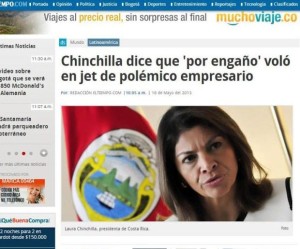 Similar reports of Chinchilla’s narco flight made headlines in Panama (Estrella en Panama), El Economista in Spain, In Peru, Peru21.com and in Nicaragua, El Nuevo Diaro, to name a few.

Back in Costa Rica, the leading television news, Teletica, during its noon (an most important time slot for news) aired a live interview from Colombia with Lina Marín who confirmed that Morales does not have any record, but has been the centre of numerous investigations for links to drug trafficking in Colombia. 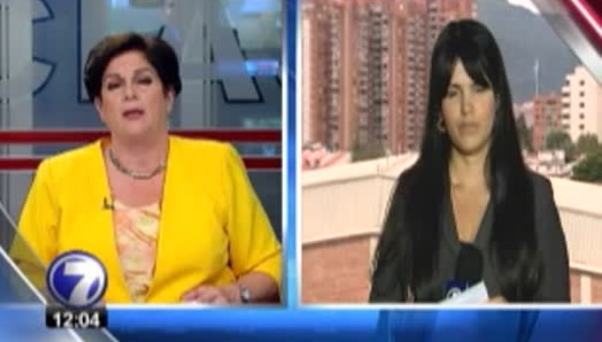 Politicians like Ottón Solís, former leader of the Partido Acción Ciudadana (PAC) and presidential candidate on several occasions, was direct to the point, “It was a private tour that should be covered personally. They (Chinchilla government) don’t care who gives them a gift and they accept it, because only at a very high level of stupidity does a politician accept such a gift without finding out who is behind it“. 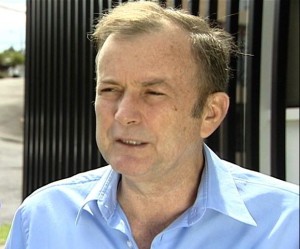 For his part, legislator Luis Fishman, head of the PUSC party and former presidential candidate said, “one would think that at this point in the fight against drug trafficking, that there is a propotcol at Presidentia House to say who can lend them a plane, its is either naivité or stupidity“.

Fishman added “there are mechanisms in place to verify registrations, driver’s names or corporate boards, who have been linked to the drug tafficking, appearing in the system….”.

Solís had another possible explanation, that of Ticos (Costa Ricans) not having malice, quickly willing to trust.

For his part, PLN presidential candidate, Johnny Araya has kept quiet on the subject, refusing requests from the press to provide a statement.

Jorge Chavarría, Costa Rica’s Attorney General, described on live television (during the same noon hour telecast) “there must be a weakness in the Presidential security service”. Chavarria explained how his department was not contact, nor in reality have available the intelligence information to give warnings, etc.

The opposition party, the PAC is calling for the immediate resignation of anti-drug czar and head of the Dirección de Inteligencia y Seguridad (DIS), Mauricio Boraschi.

The DIS is Costa Rica’s intelligence service and in charge of the protection of the president.

Carmen Muñoz, head of the PAC party block of legislators said, “the circumstances surrounding the Presidenta’s trips in a THX plane reveal a structural problem in the direction of the intelligence and state security”.

“Boraschi must go. He lost all authority by not timely detecting such drug penetration in the heart of the Government”, stated Muñoz.