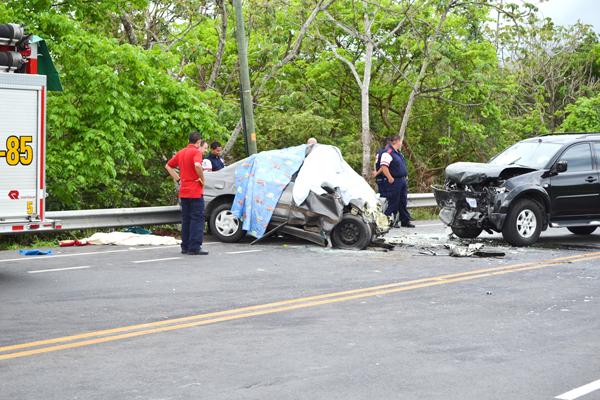 The blood continues to spill on Costa Rica’s roads. Year to date, the number of people losing their live is 148: 117 deaths at the scene of the traffic accident and 27 in hospital. 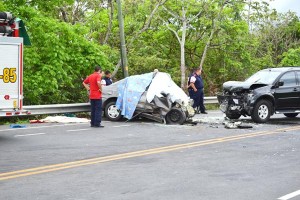 The latest fatal accident was on Sunday afternoon on kilometre 71 on the Ruta 27 (the San José – Caldera), near bridge over the Jesús María, in Tivives (Orotina).

The accident that occurred around 2pm between two vehicles, a Mitsubishi SUV and Hyundai sedan, all the deceased, three adults and three minors, in the latter.

The police report said that one of the minors was thrown from the vehicle and lay in the road. The OIJ de Puntarenas identified two of the deceased adults as Marvin José González Anchía and Etilma Roxana Anchía Varela.

The Policia de Tránsito is investigating the cause of the accident, which appears to be caused by speeding, the vehicles hitting head on when one tried to pass other vehilces on the two lane road.

Witnesses said that things happened so fast they weren’t able to say who was at fault.

Unofficially, the driver of the Hyundai had six traffic tickets, that are still waiting trial, for speeding and one traffic accident.

QCOSTARICA - After complaints raised by migrants because they...
Politics