The alleged attacker in the Sunday afternoon violence outside the Cartago soccer stadium, facing 20 to 35 years in prison for attempted murder turned himself in to police on Monday night

We all watched in shock Monday morning, as rival soccer fans – hooligans – faced each other outside the Cartago stadium. In one impacting scene, a young man raises a rock over his head and slams into another young man, now laying on the ground being kicked by other young men. 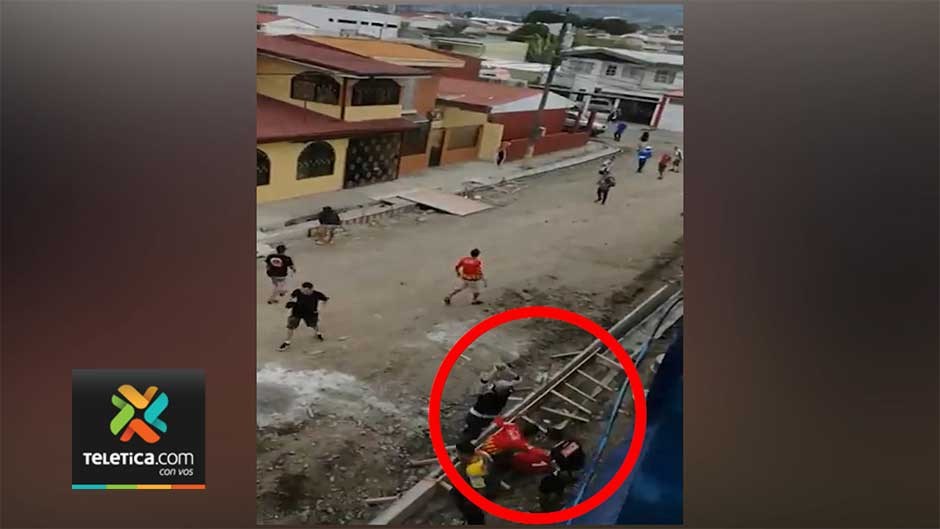 The event occurred Sunday afternoon between rivals of the Club Sport Herediano and Cartaginés.

Everyone scatters as police close in.

The young man, 28-year-old Esteban Araya Arias survived the attack, recuperating in hospital after surgery to his skull, crushed by the rock.

The manhunt is on. The Organismo de Investigación Judicial, Fuerza Pública and Cartago municipal review the images and videos from smartphones and security cameras, in search of the man who faces charges of attempted murder.

Facing between 20 to 35 years in prison, if convicted, a 30-year-old man, identified by his last name Sanchez, at 7:40 pm Monday turned himself in at the Heredia delegation of the OIJ.

“He (Sánchez) surrendered himself to the agents in Heredia, where he is a resident. At this moment he is being prosecuted as the main suspect in this case and we preparing the report to pass it to the Public Prosecutor’s Office,” said Marisel Rodríguez, spokesperson for the OIJ.

Hours later, Sanchez is transferred to the Cartago courthouse.

This video has crude images of the violence on Sunday. Watch with caution.

Rodriguez added that agents are continuing their investigation to identify they other suspected in the melée.

Today, a lot of fingerpointing is going on, that, as in the past, has done nothing to eliminate the “barras” (rival groups) from violence prior, during and after soccer games.

The MSP countering that the security plan by the Cartago team was not approved and the reason for the lack of police presence.

Past the rhetoric, there is unison that “drastic measures” must be taken to stop the violence. But after the dust settles all sides become silent until the next time.