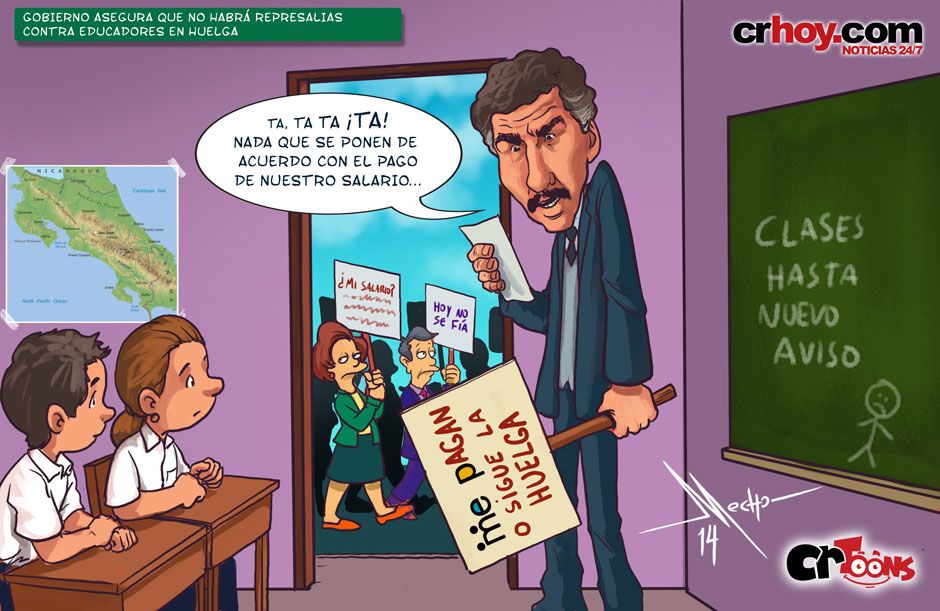 Despite a plea from President Luis Gulliermo Solis to end the strike he originally supported, the teachers unions continued to maintain their strike stance which has left 675,000 students idle. They say that they refuse to believe that the Education Ministry is serious about ending the strike. 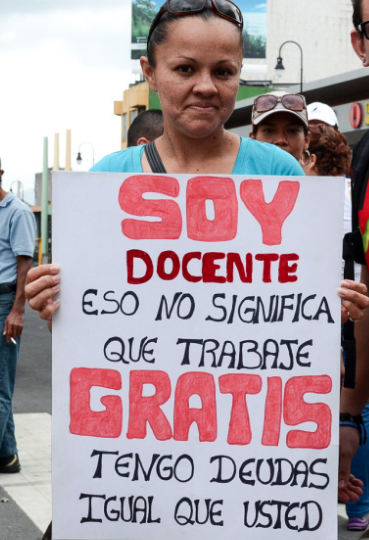 The strike was started because the Ministry has not paid the teachers their entire salary since February due to difficulties in programming the newer computers at the Finance Ministry which are largely incompatible with the antiquated ones at the Education Ministry.

The unions scheduled a concentration of demonstrators Monday at San Jose’s Central Park to kick off the strike’s third week. Some teachers did receive at least part of their pay on May 15 but most did not. The interface between the Education Ministry computers and Finance’s newer Integra2 program stubbornly persists.

“In a most respectful way, we have received Don Luis Guillermo’s message but we don’t share its spirit,” said the ANDE high school teacher’s union chief Gilberto Cascante, “How is it possible that he has forgotten the 25,000 educators’ families who have had problems?”

Cascante flatly accused the government of not having the will to cure the problem. Because of the assurances of both the outgoing and the new Education Ministers that the money is there, once the payment glitch is cured, Cascante said he is unable to fathom why some kind of an alternative payment plan has not been devised.

Cascante added that ANDE is weighing presenting a complaint to the International Labor Organization. He said that a court appeal had been presented against the Education Ministry when it was headed by Leonardo Garnier before the new Solis Administration took over on May 8.

But new Education Minister Sonia Marta Mora has given the unions much the same story and has depicted, instead of a lack of will, feverish efforts to cure the technical problems. (International observers liken the problem to the roll out of the U.S. universal health care home page and the resultant firestorm.)

Mora herself went on the popular radio station ADN radio 90.7 FM to promise “We’ve repeated that if the teachers return to the classrooms to take up their lessons, they will receive no penalties to their salaries. The government has already taken a hand (by) generating additional payments and advancing payments.”

“We’ve also promised a Ministry of Labor verification committee as a guarantee,” she added. She explained that the government cannot issue advance payments on the second half of May since technicians have warned her that this might endanger payment of other government workers.

Mora has steadfastly refused to point the finger of blame for the serious computer glitch. But Monday Banco Popular announced an opening of a new line of credit so that teachers may take out loans until the payment situation is restored to normal.

The arrangement allows the bank to lend up to 1.5 million colones with a two month grace period for beginning repayment and no commission charged for the paperwork. The line of credit is extended for a three month period and have a five year term at the normal interest rate of the period.

President Solis assured the teachers Sunday night that the government is doing “all that is humanly possible” to cure the problem. Meanwhile, Traffic Police said that the strike has disrupted the San Jose-Limon, San Jose-Caldeera and Turrialba-Siquirres routes as well as the favorite marching route of Second Avenue.