Teatro Melico Salazar To Get A Facelift

In celebration of its 85 years, the Teatro Melico Salazar, will get a facelift. The “Melico” as it is commonly referred to, is a veteran of Tico culture. The renovation, that is to cost ¢1 billion colones, will start with the installation of a new electrical system. 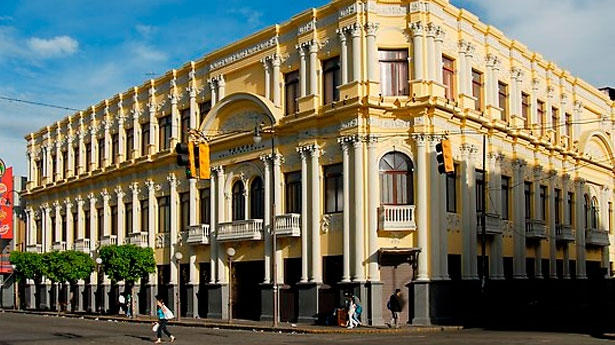 The theatre, that sits across from the Parque Central, is icon of downtown San José and all of Costa Rica and maintains a full schedule of concerts, recitals, and plays. So far, it has been likened to Madison Square Garden.

While large and built in the European Baroque style, it is far simpler than the Parisian influenced Teatro Nacional one block east.

The land was bought by Jose Raventós, who dreamed of building a theatre in which to produce zarzuelas, (usually comic Spanish operettas). The building was designed by Jose Fabio Garnier Ugalde, dramatist and architect. Construction began on February 8, 1927, and was completed October 7, 1928. The inauguration featured operettas of Esperanza Iris, the famous Mexican singer known as the Empress of Operetta.

In 1960 a new gallery was added that included a screen for Cinemascope. Seven years later, in 1967, during the dawn of April 23, a fire destroyed the room.

In the early 70s, the Ministry of Culture, Youth, and Sports decided that Costa Rica must buy the theater and renew it. In December 1981, a pre-inauguration occurred. Shortly afterwards, the building was closed to finish the restoration. There was a re-inauguration on March 6, 1985, and April 7, the following year. “The Gaceta”, the official newspaper of the government, announced law 7023 that gave the Melico Salazar the position of “cultural institution especializada” of the Costa Rican State.

Costa Rica is one of the world’s most desirable ex-pat locations and a retirement haven in Central America. The country is blessed with an...
Infrastructure

UPDATED: The DGME confirmed that anyone entering the country on or after December 17, 2019, will be allowed to legally stay until June 1st,...
National

QCOSTARICA - Due to an improvement in the epidemiological situation of the health emergency, starting March 1, the only daytime vehicular restrictions for the...
Living in Costa Rica

QCOSTARICA - The Ministry of Public Works and Transportation (MOPT) announced Thursday that it will grant a grace period for six (6) more months...
The Americas

Q REPORTS - U.S. President Joe Biden is expected to outline his vision of Washington's Latin America policy at the next Summit of the...
Business

QCOSTARICA -Viatris, one of the largest generic drug manufacturers in the world, announced the opening of commercial operations in Costa Rica, with an initial...
Health

QCOSTARICA -  How has Costa Rica done during its first year in the fight against covid-19? If you ask the demographer Luis Rosero Bixby,...
Today Costa Rica

TODAY COSTA RICA - Before the Office of the Comptroller General (CGR), the rate agreed by the Municipality of the canton of San Carlos...