Thank You, Thank You and Thank You! 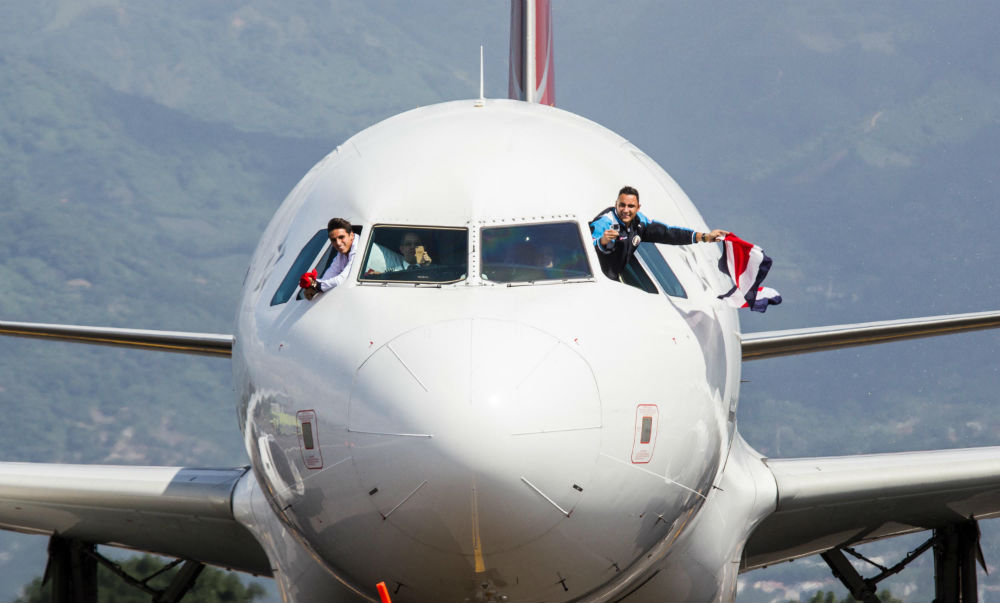 COSTA RICA NEWS – Costa Ricans can be satisfied in a big way. And they showed it yesterday, in the receiving of its players and coaches of La Selección who gave their all, going unbeaten in five games, three of them against World Cup champions and almost beating The Netherlands to advance to semi-final play.

The Ticos were a surprise to the world. They came into the games as the underdog and earned the respect of the world, including that of football greats like Mardona, earning a spot as one of the best teams in the world in 2014. 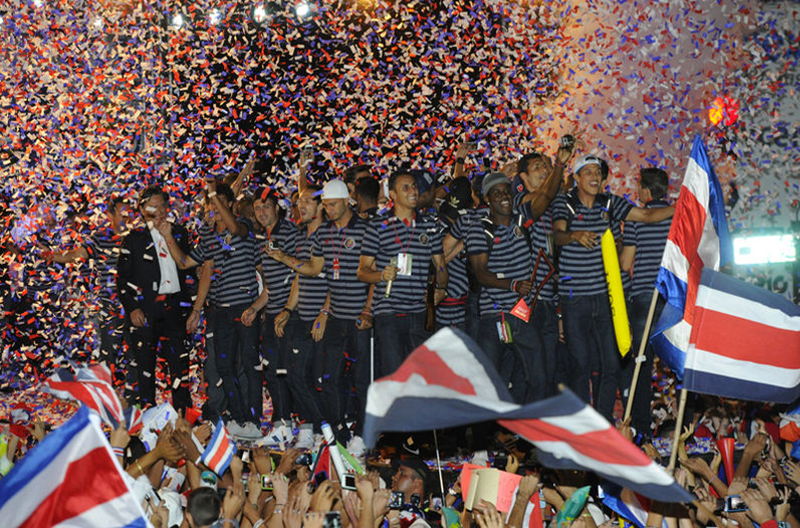 “They had a chance at the last minute, but I think Costa Rica fought it, they fought it, played with two lines of four well distributed players, they dwarfed well. No Dutch players had space to enter the area, they had to shoot from outside the area,” said Argentine footballer Diego Armando Maradona.

In Costa Rica yesterday San José came to a standstill. By noon, the original expected time of arrival of La Sele, the San José airport was already crowded with well wishers.

Hours later the entire nation was glued to their television sets, with images of the caravan moving along the autopista Genera Cañas, which remained closed from around noon, taking several hours to make the 12 kilometre trip to La Sabana. 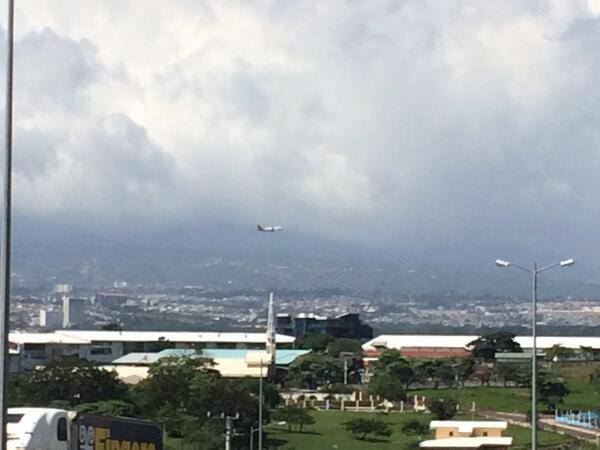 Something unheard of North America, television news and several radio stations were in direct contact with the pilot of the Avianca flight that carried the boys home.

Even more amazing, the aircraft did a fly over of San José’s west side before landing. ““From up here all we see a sea of red”, were the words of Juan Carlos Barquero, captain of the Avianca flight.

At the airport, President Luis Guillermo Solís was there to meet Costa Rica’s “hijos predilectos” (privileged sons), as they were honoured in La Sabana several hours later, and the country, for a few hours became united in one goal.

Expectations had been for a crowd of 200.000. But in reality the number of souls who came out was around 500.000, joined in one gian and honest joy, witnessing first hand the team that rewrote football history in the country.

They lined the autopista making it almost impossible for the caravan to move, taking almost five hours from the San José airport to La Sabana park. The last few hundred metres, from the Corobici hotel to the León Cortez statue, took almost one half hour as the caravan inched through the sea of people. 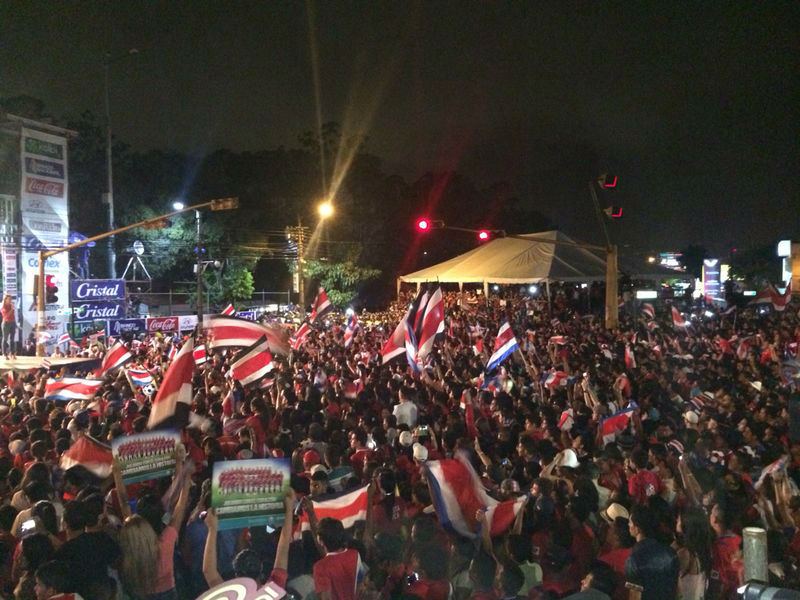 People started arriving at La Sabana from the early morning, not bothered by the news that La Sele’s flight was delayed. There was dancing, music, jokes…there was unity.

It was one big party in every sense of the word. 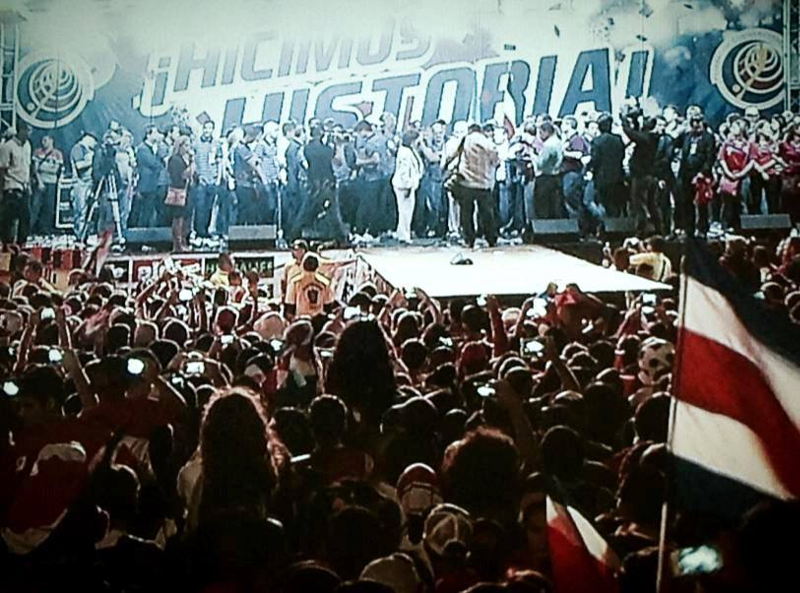 It was pure. The adminiration and thanks was sincere, but, above all well deserved for the Jorge Luis Pinto and Paulo Wanchope, steering the 23 man team who literally put Costa Rica in front of millions around the world.

QCOSTARICA - It's five in the afternoon on any given Wednesday in San José. Hundreds of people returning to their homes begin to crowd...
El Salvador

HQ - The Fuerza Publica (National Pollice) intervened an agglomeration of people on the outskirts of the Rincón Grande de Pavas school during the...
Redaqted

Q TRAVEL - Travelers from the European Union or third countries, including Costa Rica, who have fully been vaccinated, will now be able to...
Entertainment