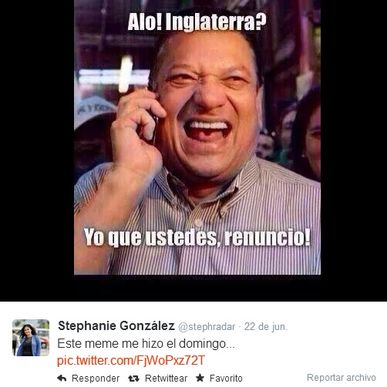 Translation of Araya message:
“Hello, England? If I were you, quit!”

COSTA RICA NEWS – Legislators of the Partido Liberación Nacional (PLN) sent a letter to president Luis Guillermo Solís to complain about the use (or misuse) of the social media by the Casa Presidencial Press Chief, Stephanie González.

The PLN is ticked off by a “meme” by González on her Twitter  account of an image of former presidential candidate Johnny Araya calling on the England team if they are calling it quits “like he did” ahead of tomorrow’s game and the last of Group D with Costa Rica.

If you will recall, Araya threw in the towel in the presidential elections on March 5.

The letter signed by the leader of PLN legislators, Juan Luis Jiménez Succar, said that González’s conduct was a case of political belligerence and “political propaganda” by the government against the PLN.

“Activities such as shown by Miss González is a clear sign that the government has no genuine desire to reach agreement in a transparent and accountable manner,” concluded the letter by Jimenez Succar to  Solís.

Also criticizing the Tweet was the manager of the PLN presidential campaign, legislator Antonio Alvarez Desanti.

However, Gonzalez said that her tweet “absolutely” did not express the position of the government.