The Peasant Farmer Who Stood Up to the President of Nicaragua 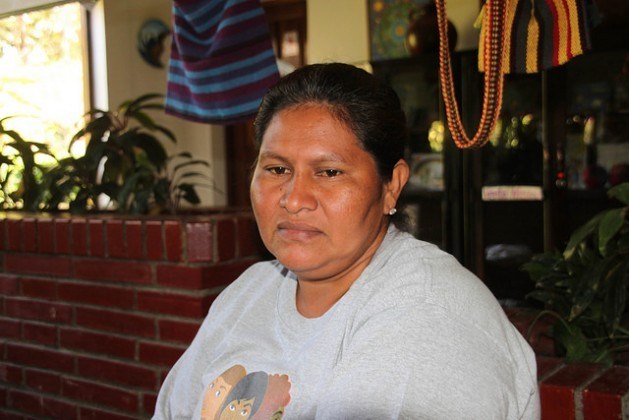 TODAY NICARAGUA – MANAGUA (IPS) – The unequal battle that small farmer Francisca Ramírez is waging against the Nicaraguan government of Daniel Ortega has become so well-known that people are calling for her security and her rights from the political heart of Europe.

Who is she and why did the European Parliament order Nicaragua on Feb. 16 to protect her life and rights, as well as those of thousands of peasant farmers in the centre-south of this impoverished Central American country?

Ramírez is a 40-year-old indigenous farmer who has lived all her life in the agricultural municipality of Nueva Guinea, in the Autonomous Region of Caribe Sur, 280 km from the capital.

She told IPS in an interview that her family has always lived in that rural area, which was the scene of bloody fighting during the 1980s civil war.

When she was eight, her father abandoned them and her mother had to work as a day labourer, while Ramírez took care of her five younger siblings.

Having survived the U.S.-financed war against the government of the Sandinista Front for National Liberation (1979-1990), Ramírez learned agricultural work, got married at 18, had five children, and with the effort of the whole family, they acquired some land and improved their living conditions.

Ortega, who governed the country in that period, after overthrowing the dictatorship of Anastasio Somoza, returned to power in 2007. In January, he started a third consecutive term of office, after winning widely questioned elections where the opposition was excluded, supported by a civil-military alliance which controls all the branches of the state.

Ramírez was happy with her life until 2013. “They told us over the radio that they were going to build a canal and I thought that it was a very important thing because they said that we were no longer going to be poor,” she said.

Then, gradually, the news started to change her perception of the project to build the Great Nicaraguan Canal linking the Atlantic and the Pacific, granted in concession to the Chinese group HKND in 2013, and she started to ask questions that nobody answered.

One day, bad luck knocked on her door: delegations of public officials who her community had never seen before, accompanied by members of the police and the military, escorted delegations of people from China who made measurements and calculations about the properties of the farmers.

“The route of the canal runs through your property and all of you will be resettled,” they told her.

Law 840, passed in 2013 to give life to the over 50-billion-dollar mega-project, which she was barely able to understand with her three years of formal schooling, was very clear: they would be paid for their lands a price which the state considered “appropriate”.

So the resistance began. “At first everybody was happy, we thought that at last progress was coming, but when overbearing soldiers and police officers started to show up, guarding the Chinese, the whole community refused to let them in their homes and we started to protest,” she said.

Since then, she said the official response has not varied: repression, harassment and threats to farmers who refuse to give up their land.

Ramírez said that she became an activist in the National Council in Defence of Our Land, Lake and Sovereignty, a civil society initiative to organise the peasant movement to defend their lands and rights.

She started marching behind the rural leaders who led the first demonstrations against the canal.

Later on, the leaders were arrested, threatened, intimidated and repressed by the police and military, and Ramírez unexpectedly found herself leading the demonstrations in 2014.

Her leadership caught the attention of the national and international media, human rights organisations and civil society.

Soon, the peasant marches against the canal became a symbol of resistance and more people joined, turning the movement into the most important social force to confront Ortega since he took office again 10 years ago.

The peasant movement against the canal “is the strongest social organisation that exists today in Nicaragua. Within any movement, an authentic and genuine leadership emerges, and that is what Mrs. Ramírez represents,” sociologist Oscar René Vargas told IPS.

The president “is aware that the movement is the most important social force that his government is facing,” he said.

The admiration that Ramírez arouses, with her ability to organise and lead more than 90 demonstrations in the country, has irritated the authorities.

More than 200 peasant farmers have been arrested, about 100 have been beaten or wounded by gunfire, and the government has basically imposed a military state of siege in the area, where it refuses to finance social projects, according to the movement.

Police checkpoints along the entire route to Nueva Guinea and military barricades in the area give the impression of a war zone.

Ramírez has not escaped the violence and harassment: her house has been raided without a court order, her children and family persecuted and threatened by intelligence agents and police officers, her belongings and goods that she sells, such as food, confiscated and damaged, and she has been accused of terrorist activities.

One of the latest episodes occurred in December 2016, during a visit to Nicaragua by Organisation of American States (OAS) Secretary-General Luis Almagro, to discuss with Ortega the allegations of attacks on democracy.

They partially destroyed the main bridge out of the area, and suspected members of the movement’s Council were held at military checkpoints.

They even confiscated Ramírez’s work vehicles, used them to transport troops and later damaged them, according to Gonzalo Carrión, from the Nicaraguan Human Rights Centre.

“Ortega’s government has visciously mistreated Francisca Ramírez and the farmers who follow her. Her rights have been violated, from the right to protest to the right to freedom of movement, and we fear that they will violate her most sacred right: to life,” Carrión told IPS.

Walking along footpaths in the dark and crossing a deep river, where she almost drowned, Ramírez got around the military cordon and travelled, disguised and hidden in a truck, to Managua, where she was able to meet with Almagro on Dec. 1, 2016 and tell him of the abuses to which her community had been subjected for refusing to give up their lands.

On Feb. 16, the European Parliament issued a resolution condemning the lack of protection for human rights activists in Nicaragua, putting a special emphasis on the case of Ramírez, and lamenting the deterioration of the rule of law and democracy in this country.

The members of the European Parliament urged “the national and local police forces to refrain from harassing and using acts of reprisal against Francisca Ramirez for carrying out her legitimate work as a human rights defender.”

“Francisca Ramirez is a victim of abuses by the police in the country aiming at risking human rights defenders’ security and livelihood,” the European Parliament denounced.

“Ramírez, coordinator for the Defense of the Land, the Lake and Sovereignty, was in Managua to file a formal complaint over acts of repression, violations of the right to free circulation, and aggression experienced by several communities from Nueva Guinea on their way to the capital city for a peaceful protest against the construction of an inter-oceanic canal, projects which will displace local farmers activities and indigenous people from the premises of the construction,” the resolution states.

While the government remained silent about the resolution, social activist Mónica López believes that it represented a victory for the rural movement.

“Without a doubt, the resolution is a social and political victory for the peasant movement against the canal, a condemnation of Nicaragua, and a global warning about what is happening against indigenous peasant movements in Nicaragua,” López told IPS.

The government asserts that the canal project is moving ahead, although a year has passed with no visible progress, and it maintains that it will eradicate the poverty that affects more than 40 per cent of the 6.2 million people in this Central American country.