The Positives of Life in the U.S. for Less in Costa Rica 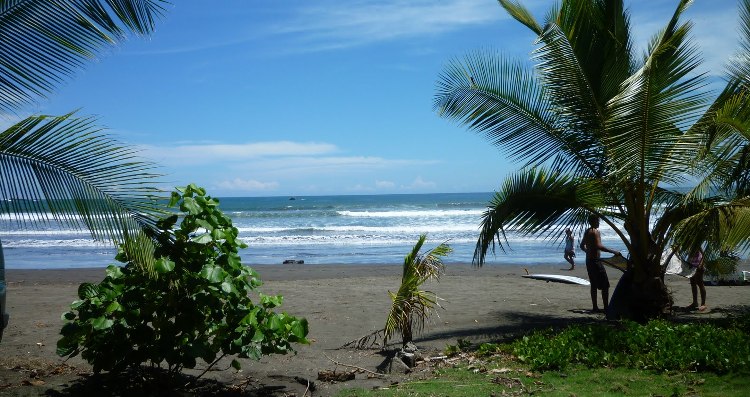 Bruce and Karen Huss’s move to Costa Rica’s Central Pacific coast evolved over time. Their first visit was five years ago, when they spent time in the exclusive Los Sueños resort community in Playa Herradura, just north of Jaco. On the seventh day of their trip, the couple bought a condo in the development as a vacation home.

“Never in our wildest dreams did I think we’d live here, though,” says Karen. “But we started coming down more and more.”

After seeing friends’ beach-front homes, they began looking further afield, 30 minutes south of Jaco to the quiet beach community of Esterillos. It was there that they started looking for a lot. When real estate prices dropped in 2010, it was a good opportunity to buy. With the help of a local architect and contractor, they custom-built their dream house, with a view of the beach and the Pacific. And they’ve lived in the area full-time since their home was finished two years ago.

“I love the beach. We used to live on the beach in Oceanside, California. Here it cost us a quarter of what it did there. And the taxes are much, much less,” says Karen. “I’m prejudiced, but we live on one of the most beautiful beaches on the Pacific coast.”

Both officially retired, the Husses enjoy many of the comforts of home, often for much less. They have regular massages done at their house and also have a housekeeper and a gardener/caretaker who comes six days a week. And visits to the local chiropractor, a fellow Californian, cost $40 in Esterillos versus $125 per visit back home.

Bruce can stream his satellite TV channels, including NFL games, over the Internet from California. The couple also has a U.S. phone number with a California area code, thanks to the Internet phone-service Vonage.

“We didn’t have to give up a single thing when we came down. You can live with the pluses of the U.S. without any of the negatives,” says Bruce. “We’re never bored for a minute.”

But they’re not insulated from the community at all. They’re active in their local church, and Bruce is even overseeing the building of a new church. And they have become fast friends with an ever-expanding group of their Tico neighbors and fellow expats, including several newcomers they’ve taken under their wing. Both play golf at Los Sueños.

The tropical climate, the fast friendships, and the relaxed but fulfilling way of life…the Husses are in Costa Rica for the long haul. And many late afternoons, you can find them enjoying a glass of wine with neighbors on the beach, watching the beautiful sunset.

- Advertisement -
Paying the bills
Previous articleBLOG: No Soap With My Coffee Please!
Next articleBehind The Iron Curtain or Behind Bars