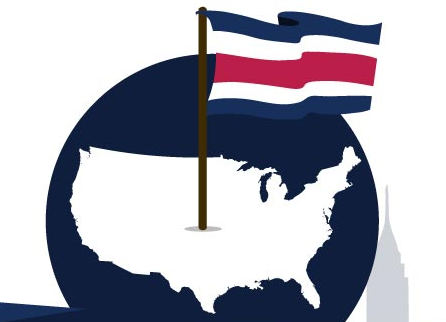 Costa Ricans born in the United States are the major driver behind the increase, since emigration did not show greater variations over the decade in question.

Many of these Ticos do not yet know Costa Rica, but are nationals for having at least one parent a Costa Rica.

The U.S. is the main destination of Tico emigration, according to a study by the World Bank using data from the American Community survey 2010.

Some of the reasons for Costa Ricans choosing to live abroad are seeking to improve their living conditions. As explained by the director of the Institute of Social Studies on Population (Estudios Sociales en Población – Idespo), Guillermo Acuña, the main centres of emigration in Costa Rica are in areas historically devoted to coffee growing.

According to Acuña, it is wrong to think that the people who emigrate are the poorest. “To go abroad economic resources and support networks are needed,” says the expert.

The state of California is the principal choice of Costa Ricans, home to 22,469 Ticos; followed by Florida with 20,761; and New Jersey with 11.756. Though less in mumbers, Ticos call home the states of  Texas, North Carolina, Pennsylvania, New York, and Georgia.

Data of the number of Costa Ricans living abroad demystify the belief that the country only receives migrants and their citizens do not want to leave. What is certain is that compared to other countries in the region, national emigration rates are low.

QCOSTARICA - Fifteen months after the national emergency against covid-19 was declared, Costa Ricans will have a digital platform where you can be notified...
Travel

Today, Friday, June 11, only EVENS can circulate. The measure is countrywide and applied between 5:00 am and 9:00 pm, save for those under the...
Weather

QCOSTARICA - Characteristic of the rainy season, we will see rain in the afternoons and nights in the Central Valley, the entire Pacific coast,...
Latin America

Q REPORTS (Council on Foreign Affairs) Democracy is being destroyed in Nicaragua. This has been the long-term project of Daniel Ortega, the country’s dictator,...
Rico's Digest