There are still those who don’t get it…

Rico’s TICO BULL – Browsing social networks I still am amazed at how some, at times, seems many still haven’t gotten the facts straight about Costa Rica’s borders, who can enter and who cannot enter. And who can leave.

Questions from those living on the outside and itching to visit or get back to Costa Rica I can understand, they are not bombarded daily with this information, aren’t living the reality of us here. They have their own reality to deal with.

But what of those who live here, some for long time, not just visiting. The news of border restrictions, though official are in Spanish, have been published on English language websites, Italian, French, German and so on.

Look, right now only Costa Ricans and legal residents who didn’t leave the country after March 24 can enter the country at any border point – land, sea or air – and comply to a 14-day self-isolation order.

Tourists, non-residents, that is those who live in Costa Rica, as if they were residents, but have not the status of a resident, cannot enter the country at this time. The borders to them will be re-opened on August 1, 2020. Unless there is yet another extension.

Leaving Costa Rica, the borders are not closed. Anyone can leave and at any time. The choices are limited, but they can leave.

There is Nicaragua. There are limited scheduled flights from the San Jose airport. You can hire a private charter flight for yourself or a group of friends. The ports are open, you can hire a charter boat.

The options are not many, not only as to the method of travel but also the destination.

From the immigration website: As of this Thursday, March 19, at 00:00 hours, the restriction of foreign persons to the national territory began to be applied as dictated by Executive Decree No. 42238 – MGP- S.

According to this decree, only Costa Ricans, and foreigners with a migratory status granted by Migration, that is, people who hold a Special Category, Temporary or Permanent Residence, and who have left the country BEFORE March 24, 2020, may enter the national territory.

Likewise, the following are excepted from the restriction:

Any person who enters the national territory from March 19, must comply with a quarantine of 14 days at their home, for this, the decree empowers the officers of the Immigration Police to notify all persons entering the country from March 19 to comply with said health order, for this the officer will give each person a form where they must indicate the place of residence, full name and ID number and means to communicate with him or her.

This restriction will last until August 1, 2020, at 11:59 p.m., at which time an analysis of the situation will be carried out to determine if the measure ends at that time or extends for a longer time.

Remember that if you are a foreigner with a migratory category, you left the country, and when you left an entry impediment was imposed, it is extended according to the border closing date, so you will not be able to enter the country until the Government indicates reopening of borders. 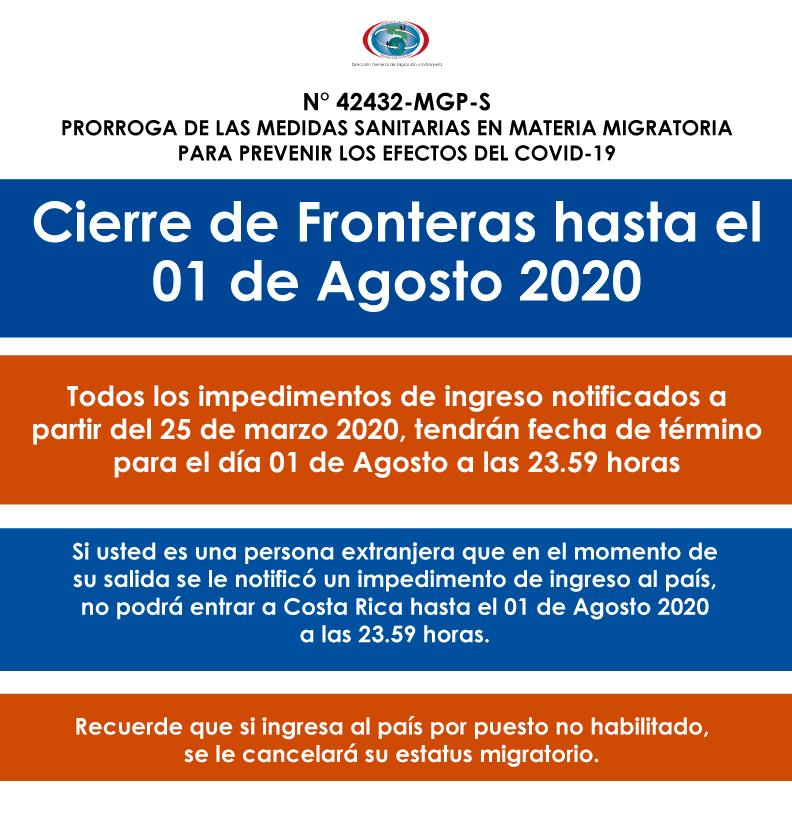 Pay attention to the last paragraph: Remember if you enter the country illegally your migratory status will be canceled.