This Is Why You Shouldn’t Feed the Monkeys 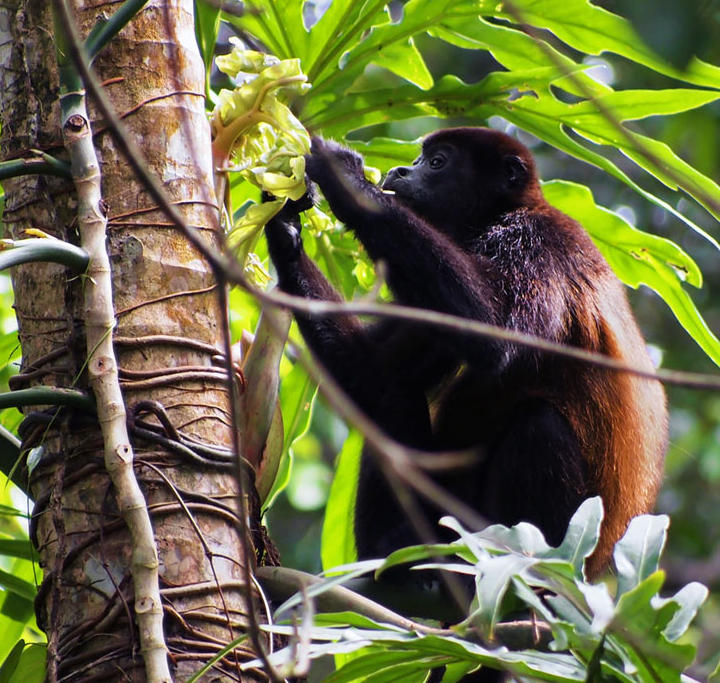 Before moving to Costa Rica, I had no idea that feeding monkeys was harmful.

Or that their main diet didn’t consist of grubbing on bananas all day.

Fortunately, the Kids Saving the Rainforest organization set me straight. Founded by two young girls, this amazing nonprofit wildlife sanctuary in Costa Rica is protecting not only the rainforest but the incredible biodiversity that lives in it as well.

After taking a tour of their wildlife sanctuary and partnering with them on our trips to Manuel Antonio, Costa Rica, I discovered their 10 reasons we shouldn’t feed the monkeys and had to share.

As the President of the foundation, Jen Rice, puts it: “You might find feeding the monkeys (and other wild animals) to be a thrilling experience, but you are not doing the monkeys a favor. In fact, you are actually harming them.”

1. Monkeys are highly susceptible to diseases from human hands

Monkeys can actually die from bacteria transferred by your hand.

Since monkeys live in a very different environment than us, they are exposed to different types of bacteria. If they’re introduced to a foreign bacteria, such as something that could have come from your hands, they may not have the proper defense system to fight it off and could be more susceptible to illness.

Therefore, if you get the amazing opportunity to hang out with monkeys, treat the situation much like a museum:  look, but don’t touch.

2. Migration to human-populated areas to be fed increases the risk of dog attacks and road accidents

Intuitively, monkeys have an understanding of what is safe in their natural environment. When they move outside of this environment, they are faced with dangers they are not equipped for.

It’s like raising a kitten in your apartment for years and then one day releasing it into the jungle. The domesticated cat is going to have a lot of difficulty adjusting to the wild, just as a wild monkey is going to face unknown dangers in our modern world.

When monkeys are fed by humans in more populated areas, they approach humans and suddenly become very susceptible to foreign dangers in these novel environments.

3. Irregular feeding leads to an aggressive behavior towards humans and other species

If a monkey receives food from a human they assume the next time they see a person with food they are going to get some.

If they don’t the result could look something like this:

Keep your food to yourself and let’s not induce aggressive behavior with our monkey friends.

4. Contrary to the stereotype, bananas are not the preferred food of monkeys in the wild

It turns out, bananas are native only to Australia & South Asia so they never existed in any other country on Earth before humans started to farm them.

Because of this, monkeys in Central America do not even have the proper digestive system to process these foreign foods–especially if they’re not wild bananas since farmed ones contain pesticides.

Lastly, there is a lot of sugar in bananas (it’s why they like them so much) which can lead monkeys to have serious dental problems and even diabetes (yes, monkeys can get diabetes too).

5. Feeding creates a dangerous dependency on humans that diminishes the monkeys’ survival abilities

Every day a monkey is dependent on a human for food, they diminish their ability to naturally find it in the wild.

As this continues, it becomes very dangerous for the monkey to survive on its own. By feeding the monkeys, we are literally robbing them of their survival skills and increasing the likelihood they will won’t live as long.

So that banana isn’t helping them. It’s hurting them.

6. Feeding interferes with the monkeys’ natural habits and upsets the balance of their lifestyle

The natural diet and lifestyle of monkeys is centered around eating wild fruits, seeds, small animals, and insects.

If we disrupt this process by feeding them other food, it can negatively impact their daily lifestyle and how they naturally interact with their environment.

This isn’t good for obvious reasons, but there are also unknown negative side affects this may cause in the complex web that is our ecology within the animal kingdom.

7. Contact with humans facilitates poaching and the trade in illegal wildlife

Believe it or not, there are people who will actually capture and poach monkeys for financial gain and when a monkey does not have a natural fear for humans, it is more likely they will be captured by a poacher compared to a monkey who retains their instinctive caution of human beings.

In fact, Kids Saving the Rainforest won’t even release monkeys from their sanctuary back into the wild if they have no fear of humans because of the danger it imposes on the monkey.

Unfortunately, the more contact monkeys have with humans, the more it decreases their ability to survive in the jungle.

8. Pregnant females who are fed nothing but bananas during their pregnancy will not give birth to healthy infants.

If monkeys become solely dependent for food via humans, it can have dangerous consequences.

Since bananas aren’t a regular part of their diet, if they’re only fed bananas during their pregancy, the babies will be malnourished, or never develop to term, and even die before birth.

9. Monkeys need to travel an average of 17 kilometers each day to be in good physical condition

Unlike humans, monkeys aren’t going to work out for the sake of staying in shape. If they know that delicious food is readily available in a safe location, they are going to travel there and stay.

This can be extremely harmful for monkeys since it is essential for them to hunt and forage for food naturally so they can stay in shape physically.

10. Not only do we pass on diseases to animals when we feed them by hand, but they can pass diseases to us as well

The monkeys do not realize any of this but now YOU do.

Don’t facilitate the extinction of one of Nature’s most amazing creatures for your own pleasure or financial gain.

If you are feeding the monkeys, you now know why you should stop. If you don’t stop we owe it to the monkeys to publish your name with the local media.

TODAY COSTA RICA - This photo is of the...