Mexico deported more than 114,000 foreigners in 2021, according to data from the Migration Policy Unit of the country's Ministry of the Interior. 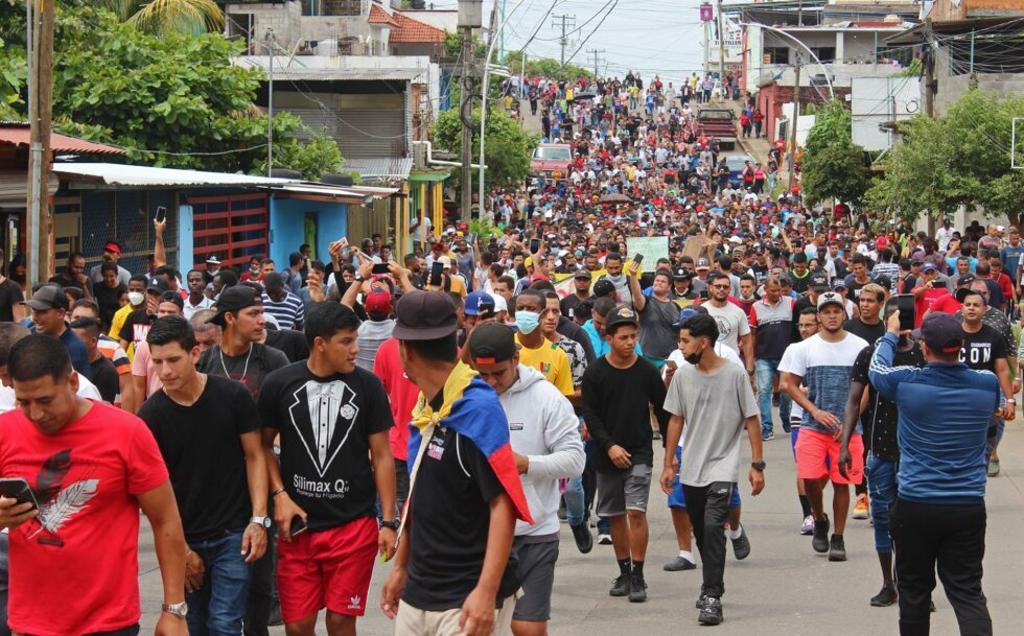 Q24N (EFE) Some 5,000 migrants from Central and South American countries marched last week for the second day in a row in the Mexican city of Tapachula, on the border with Guatemala, and threatened that a new caravan would leave this week if the authorities did not provide them with immigration documents.

The migrants left the center of Tapachula for the Siglo XXI migration station to ask the authorities of the National Institute of Migration (INM) to grant them documents to be able to travel through the country, reach the northern border and advance towards the United States.

The group made up mostly of people from Venezuela, Angola, Haiti, Honduras, Salvador, Guatemala, and Nicaragua spread out a huge banner on which read: “Migrantes con Dios” (Migrants with God).

The contingent reached the immigration office in a peaceful manner where they were attended by a commission of INM agents, who asked the migrants to form a group of five people to give them information and serve them.

Riot police were already waiting for this group of people inside the building, where an officer in charge of security said that negotiations would take place with immigration personnel.

“We do not want there to be violence under any circumstances and we do not want to apply public force to you, so I beg you to act in accordance with the law,” said the officer to try to maintain order among the migrants.

A migrant from Venezuela, Luvia Guel, who arrived in Tapachula a month and a half ago, lamented that government agencies are slow in their migration processes.

Her compatriot, Jonathan Pichardo, said that they have done all the pertinent procedures, but the date for their visas has not yet come out.

Authorities asked the migrants to formalize their request to the INM authorities, but they said that the answer would take time that way and they could no longer wait a week or two.

“This issue must be resolved no later than this Monday (May 30), ideally it should be resolved before, because we are already a group of 7,000 people, they say that there is attention in 100 windows but they do not resolve it,” said Luis Rey García Villagrán, director of the NGO Center for Human Dignification (CDH), after the meeting.

In addition, he said that the migrants are going to wait for a response from the authorities, but he warned that if they do not comply with what was promised next Tuesday, they will start the eighth caravan so far this year.

The region is experiencing a record migratory flow to the United States, whose Customs and Border Protection (CBP) office detected more than 1.7 million undocumented immigrants on the border with Mexico in fiscal year 2021, which ended on September 30.

Meanwhile, Mexico deported more than 114,000 foreigners in 2021, according to data from the Migration Policy Unit of the country’s Ministry of the Interior.

While in fiscal year 2022, which began on October 1, 2021, the CBP has counted more than 1 million migrants intercepted at the US southern border.

- Advertisement -
Paying the bills
Previous articleRodrigo Chaves to veto reduction bill
Next articleRemittances show a year-on-year growth of 29.1% in Nicaragua