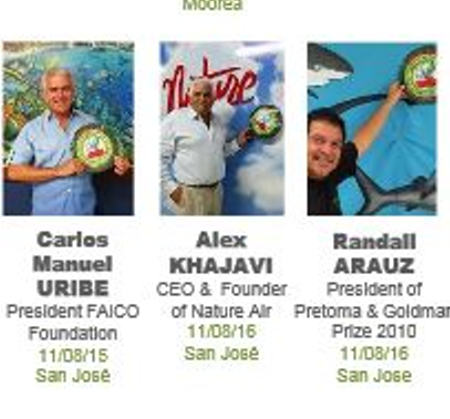 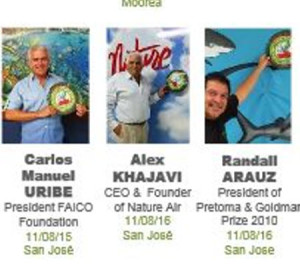 Randall Arauz (of Petroma), Alex Khajavi (of Nature Air) and Carlos Manuel Uribe (of Amigos de la Isla del Coco) are included in the list of world’s most influential environmentalists and share place with legendary fighters from natural resources such as Paul Watson of the Sea Shepherd.

To see the 100 Guardian Angels of the Planet:
http://www.pretoma.org/wp-content/uploads/2013/06/Guardian-Angels-of-the-Planet_The-Legends.pdf

From June 3rd -5th, the Founding Congress of the Green Games was held in the UNESCO Building in Paris, France, where Arauz, Khajavi and Uribe were chosen as one of the “100 Guardian Angels of the Planet.”  The event took place in the framework of the Global Conference – International Forum for a Sustainable Development.

The project is an initiative of visionary couple Emanuelle and Clemence Errard, who decided to act to provide children with knowledge on sustainable development and that they in turn act directly in the future to conserve the planet’s resources.  They travelled around the world with their 7 year old son Jules, and interviewed whom they considered the most outstanding environmentalists of the planet.  By holding these Green Games in June of 2015, and with the inspiration of the Guardian Angles, children of the world will be brought closer to each other by seeking solutions to common environmental problems in a fun way, thus turning them into “Guardian Angels.”

“Who can be better Guardian Angels than the kids themselves,?” asked Randall Arauz, of the Costa Rican organization Pretoma.  “We have to create awareness and provide training through all means possible so that starting from a very young age, and all the way into adulthood, they are also committed Guardian Angles of the Planet, no  matter what career path they follow.”

The objective of this first meeting was to validate the principles of the Green Games and officially launch the project to the media.  The Green Games are considered to be the beginning of a new era, an era of transition, the theme of the Eighth Edition of the Global Conference – International Forum for a Sustainable Development.

Whether you struggle to learn in a traditional educational...
Health