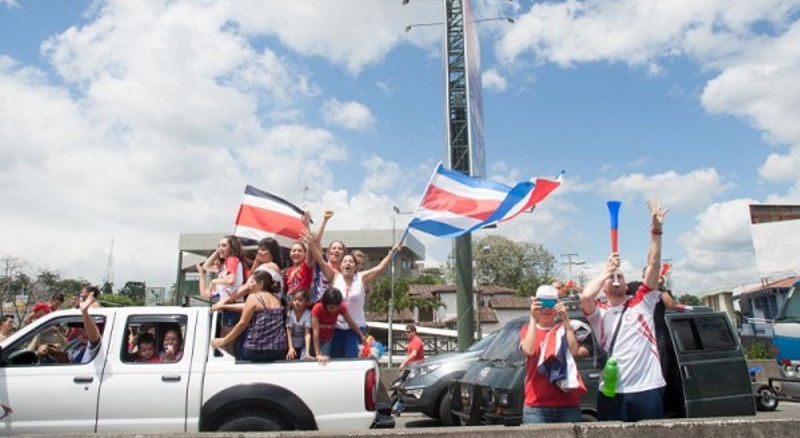 COSTA RICA NEWS – Euphoria and joy overflowed in Costa Rica after Sunday’s win against Greece and the Sele’s advancing to the quarter-finals. But, not all was positive.

According to the Ministerio de Obras Públicas y Transportes (MOPT), Costa Ricans are not yet able to celebrate behind the wheel of a vehicle.

The MOPT statmeent said that the biggest problem was drunk driving. The Policía de Tránsito report that of the 227 roadisde breathalyzer tests, one third were positive, that is over the 0.75 blood alcohol legal limit. (The limit for “professional” drivers, ie bus and taxi drivers, the limit is 0.50).

Driving over the limit comes with a fine of ¢293.000 colones (US$550 dollars) and six points on the drivers licence.

The director of Tránsito, Mario Calderón, said “I really regret that our warnings went unnoticed in the heat of celebration and elation, that caused people to lose their sense of responsibility and emotional intelligence.”

Following the game, 20 people suffered injuries (13 slight and 7 serious) and one death from traffic accidents during the celebrations.

Calderón added that the incidents were not only in the greater metropolitan area of San José, but also in outlying areas. In Santa de Cruz de Guanacaste, for instance, a group of revellers attacked a Tránsito police vehicle, generating significant damage to the unit. The incident occurred when officials arrived at the scene of a traffic accident.

The director of the Tránsito assured that controls will be stricter on Saturday and asked people to act responsibly, especially not to get behind the wheel after drinking.