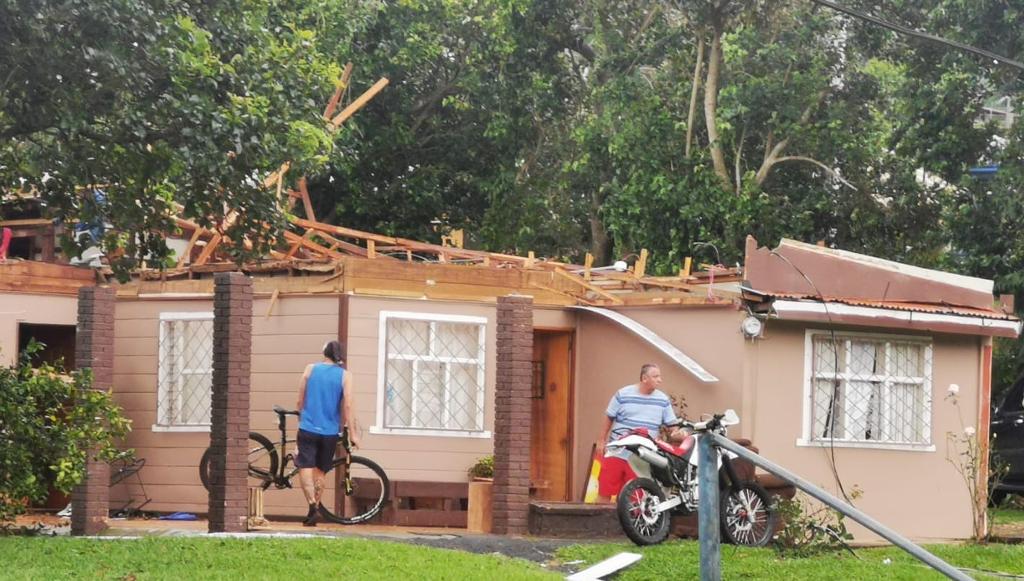 QCOSTARICA – A tornado in Heredia, falling trees in Alajuela, and electrical storms in Pérez Zeledón and around San José scared residents of those areas of the country on Thursday, August 5.

Firefighters confirmed that they attended to four fallings of trees caused by the rains and strong winds in Santiago de San Ramón, San Isidro, and Sabanilla de Alajuela, in addition, there was a short circuit in the public power line due to the passage of a tornado in Santa Bárbara de Heredia.

A tree even fell on a truck in San Isidro de Alajuela, in which two people were traveling, suffering bumps and bruises.

Another neighbor said that she got under the bed together with her daughter because she felt that the wind was carrying her away.

“My wife was very shocked, she had to get under the bed to protect herself. We took her to the hospital and they gave her some painkillers. She is stable now, but I have to sleep in the roofless house today,” is how William Camacho, a resident of Birrí, recalled his experience on Thursday, around 3 pm, when favorable atmospheric conditions led to a tornado to develop in the canton of Santa Bárbara de Heredia.

“It blew the ceiling off, the windows were broken,” Camacho commented.

Another resident of Birrí, Luis Enrique Segura, explained that he was outside his house when they called him about the emergency. “When I arrived, five minutes later, the house was already flooded and roofless, the roof was torn off, the electrical cables sparking. The trees up close were left with zinc sheets and parts of the ceiling. The tornado took hold in the Plaza de Birrí.”

Hail fell in San Pedro de Barva and a house was unroofed, damage to houses in Purabá and San Juan weres also reported.

The media outlet Heredia Hoy reported that in San José de la Montaña there were affected houses, in Barva the house of an elderly couple was left without a roof, the marriage is of scarce resources.

Municipal authorities indicated that at least 15 houses were affected.

According to the National Emergency Commission (CNE) and the Bomberos, the event resulted in unroofed houses, fallen trees and an impact on the electricity service.

Birrí de Santa Bárbara and San José de la Montaña are reported as the most.

Roberto Vindas, a meteorologist at the national weather service, the Instituto Meteorológico Nacional (IMN), said Thursday afternoon that they did not have exact confirmation that it was a tornado, but from the images they obtained from videos circulating on social networks, everything suggests that it could be such a phenomenon.

The specialist added that during Thursday afternoon there were quite significant rainy conditions in the Central Valley and the Pacific slope, the product of clouds known as cumulonimbus clouds, which are highly vertically developed clouds and are internally formed by warm and humid air that rises in a rotating spiral shape.

He specified that these types of clouds can sometimes generate gusts that can lead to tornadoes.

“It will depend on the speed of the gusts and also on the damage on whether or not this phenomenon can be classified as a tornado,” said Vindas.

However, that is no relief for the residents who lived the moments of anguish and today continue to clean up and repair the damage caused by the event.

Authorities ask not to lower our guard, at least until Sunday, August 8, as weather conditions will be the same, hot mornings and heavy downpours in the afternoons, typical of the rainy season.

QCOSTARICA - In the normal process of a bill,...
HQ