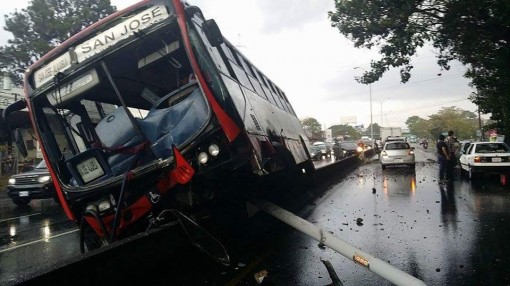 QCOSTARICA – An early afternoon traffic accident on the autopista General Cañas caused tremendous traffic congestion on the west side of San José, clogging up the country’s most travelled route.

Mario Calderón, head of the Policia de Tránsito (traffic police), explained the accident occurred around 3:30pm on the Alajuela bound lanes of the General Cañas, just past the Juan Pablo II bridge, across from the Repretel television station (next to Hospital Mexico).

The bus driver who lost control of his vehicle hit a light post, the post double over and fell onto the San José bound lanes.  No other vehicles were involved in the accident and fortunately no serious injuries or fatalities.

One of the passengers on the bus told Crhoy.com, a red coloured vehicle cut off the bus, the driver in his attempt to avoid colliding with the vehicle, lost control, hitting the concrete barrier and light post (that are in the middle of the highway, protected by the concrete barriers).

Lebanese Tiktoker chef prepares her version of the Gallo Pinto

Writing every day is not just good for your...
Lifestyle