COSTA RICA NEWS – A Nicaraguan resident who killed and gutted a green sea turtle in the province of Limon in Costa Rica has been sentenced to 12 months in prison. 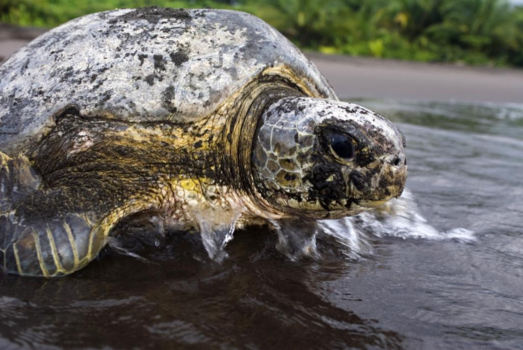 The turtle poacher by the name of Martinez was caught in the Tortuguero National Park sanctuary area by police officers during a routine patrol. He had extracted about 40 kilograms of turtle meat at the time of the arrest.

Police confiscated the turtle meat and quickly preserved it for evidence.

Martinez is on conditional release. If he should be found guilty of another crime in the next 12 months, he may find himself serving consecutive sentences in one of Costa Rica’s correctional institutions.

In addition to the sea turtles and sharp gutting instruments, officers confiscated three firearms. Additional officers have been called to continue the anti-poaching operation.

Only human beings and the large sharks feed on the adult green sea turtle. Specifically, tiger sharks hunt adults in Hawaiian waters. Juveniles and new hatchlings have significantly more predators, including crabs, small marine mammals and shorebirds. In Turkey, their eggs are vulnerable to predation by red foxes and golden jackals.

QCOSTARICA - For years, Tilarán has seen the transit of tourists heading towards Lake Arenal, the homonymous volcano and La Fortuna or towards Monteverde. At...
Travel

QCOSTARICA - Puntarenas is the only province in the country that has a contagion rate or "r" rate greater than 1. This is detailed in...
Reports