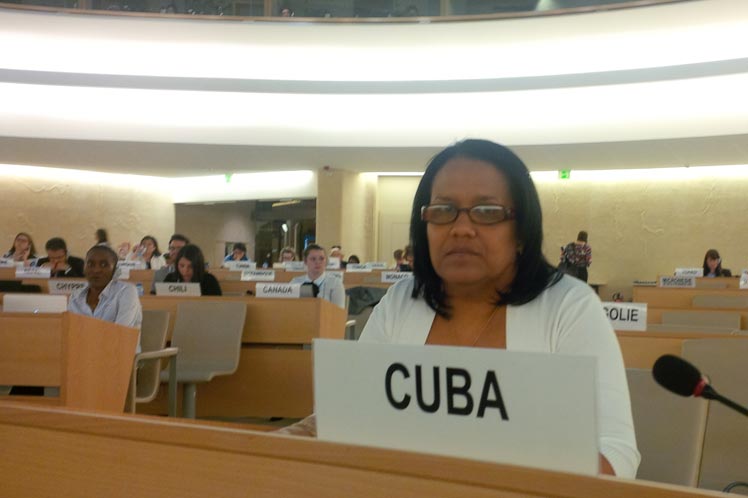 (Prensa Latina) Genera – The U.S. blockade against Cuba is a violation of international law and a massive, flagrant and systematic violation of human rights of the people of the Caribbean nation, Anayansi Rodriguez, permanent representative in Geneva, denounced today.

The Cuban ambassador to the UN in this European city participated in an interactive dialogue with the Special Rapporteur on the negative impacts of the unilateral coercive measures. She said the people of her country know well the consequences of those measures.

‘Cuba, whose people have suffered an economic, commercial and financial blockade imposed by the United States for more than 55 years, knows well the damages that unilateral coercive measures could cause,’ she said.

This siege is the main obstacle to the development of the Caribbean nation, and economic damage caused during nearly six decades of application amounts to US$753.6 million dollars, considering the depreciation of the dollar relative to gold, she added.

‘Although the government of President Barack Obama has introduced some modifications to the blockade and has urged the Congress to lift it, essential aspects of this policy are still in force,’ Rodriguez said.

The permanent representative considered that in order to advance in the process towards the normalization of ties between Havana and Washington, the unilateral and unconditional lifting of the blockade against Cuba will be required. ‘It should never exist and should cease once and for all.’

The ambassador reaffirmed her country’s position to defend that the international investment regime is not ‘autonomous,’ but should be in line with the United Nations Charter and international human rights treaties.

‘She also agreed on the need that binding obligations for investors and companies in trade and investment agreements should join,’ she added.

RICO's DIGEST - "I heard" is a term often...
Indicators