The report by the U.S. Department of State released last week bares naked the grave human rights abuses of inmates in Costa Rica’s prisons during last year, caused by overpopulation.

The document published last Thursday says Costa Rica’s prison overcrowding is at 38%, when the recommended should not exceed 20%.

The report says prison conditions were harsh. ‘Overcrowding, inadequate sanitation, difficulties obtaining medical care, and violence among prisoners remained serious problems in some prison facilities. Security and administrative staffing was insufficient to care for the needs of prisoners, including personal safety‘ says the report.

[/one_fourth]The report also notes that overcrowding hinders security and control of prisoners, contributing to violence there. Moreover, there are reports that inadequate spaces for rest, deteriorated sleeping mats and drug abuse.

The U.S reprort draws attention that in the San Sebastian jail, where most prisoners in pretrial detention are held, 1,159 prisoners lived in unsanitary conditions in a facility with a planned capacity of 664 and the reported seven deaths in closed regime centres (as of June 30).

The report notes, that on August 13,  the Ministry of Justice’s social adaptation (prisons) division reported a total population of 31,491 under its supervision, compared with 28,046 in July 2012. The population included 13,694 prisoners in closed-regime centres, 2,125 persons required to spend nights and weekends in jail, and 14,942 in supervised work programs requiring no jail time. There were 739 juveniles and 847 women prisoners as of June 30. Officials generally separated prisoners by age, gender, and level of security (minimum, medium, and maximum). Authorities held pretrial detainees with convicted prisoners on occasion. The ombudsman’s office confirmed that prison conditions were the same for women and men.

Reaction from Costa Rica’ Minsterio de Justicia y Paz*
Costa Rica’s Ministra de Justicia y Paz (Justice Minsiter), Ana Isabel Garita, said she received the report with concern, but said the govenment has made efforts. For example, she noted the program of expansion of 1.250 beds in four prisons, that will be concluded next month. 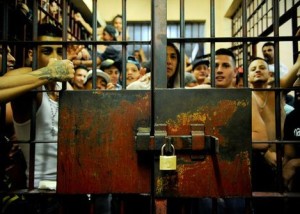 Garita also pointed out the building of a clinic in La Reforma prison (in Alajuela) and the hiring of some 200 prison guards, with an additional 100 this year. The minister added that with a loan of US$132 million dollars form the Banco Interamericano de Desarrollo (BID), the government will be building three new cell blocks in Nicoya for 550 prisoners and four cell blocks in La Reforma for 800.

Prison overpopulation continues to be a concern for Justicia, given that each week the prisons receive on average 150 new prisoners, in a system that has no capacity. “We have to build a jail every two months to meet the needs…”, said Garita,

Arbitrary or Unlawful Deprivation of Life
The State Department reported that there were no new reports that the government or its agents committed arbitrary or unlawful killings during the year. In May 2012 the Office of the Attorney General of Alajuela pressed charges against 10 prison guards involved in the 2011 killing of inmate Joehl Araya-Ramirez. According to the prosecutor’s office, it indicted six defendants in the case, and the court scheduled the trial for April-May 2014.

Torture and Other Cruel, Inhuman, or Degrading Treatment or Punishment
Although the constitution prohibits such practices and the government generally respected this prohibition, there were reports that some government officials employed them. The government investigated, prosecuted, and punished agents responsible for confirmed cases of abuse.

In July police detained 10 prison marshals for beating inmate Mayron Cabrera. On July 12, the attorney general’s office requested a tribunal to suspend the marshals for a period of three months, but the marshals appealed. Also, the Supreme Court in August ruled that prison guards abused an inmate, Roberto Maya, and ordered the government to pay reparations.

The ombudsman’s office recorded 100 complaints of police abuse, arbitrary detention, torture, and other inhumane or degrading treatment during the first six months of the year. Very few of the accusers followed through with the necessary complaint registration process at police stations.

Administration
Recordkeeping was adequate. Judicial authorities used alternative measures such as semi-detention, requiring individuals to spend nights and weekends in prison, and supervised work programs requiring no jail time. Prisoners had reasonable access to visitors and could practice their religions. Authorities permitted prisoners and detainees to submit complaints to authorities without censorship and request investigation of credible allegations of inhumane conditions. If complaints were not processed, prisoners could submit them to the ombudsman’s office, which investigated all complaints at an administrative level. The ombudsman’s office, through the National Prevention Mechanism against Torture, periodically inspected all detention centers.

Independent Monitoring
The government permitted independent monitoring of prison conditions by international and local human rights observers, including representatives from the ombudsman’s office. Human rights observers could speak to prisoners and prison employees in confidence and without the presence of prison staff or other third parties.

Improvements:
The Ministry of Justice reported maintenance and repairs in nine prison centers, including improvements to the potable water system at La Reforma and San Carlos prisons.

* In Costa Rica, the Ministerio de Justicia y Paz (Ministry of Justice and Peace) is responsible for the  prison system and not the court system

QCOSTARICA - The prestige of the company of some of the richest men in Costa Rica hangs by a thread. For many, the MECO...
Travel