Up to Monday night, May 4, the government had distributed ¢19.7 billion colones among 157,859 people affected as a result of the emergency by COVID-19, through the delivery of the Bono Proteger.

The minister of Labor, Giannina Dinarte, explained that another 91,866 people requested the opening of a bank account to receive the subsidy.

As of this Tuesday, the minister said, the Executive Branch had received the request for financial aid from 598,554 people, of this the majority (36 %) are independent workers, 22.4% are informal or temporary employees, 21.6% are people who have been laid off, 12% workers affected by labor reduction and 8% are people with suspended contracts.

The Minister said that, until now, the government has not communicated rejections in the request for these subsidies, explained that requests are not met “according to who came first”, but depending on their state of vulnerability. 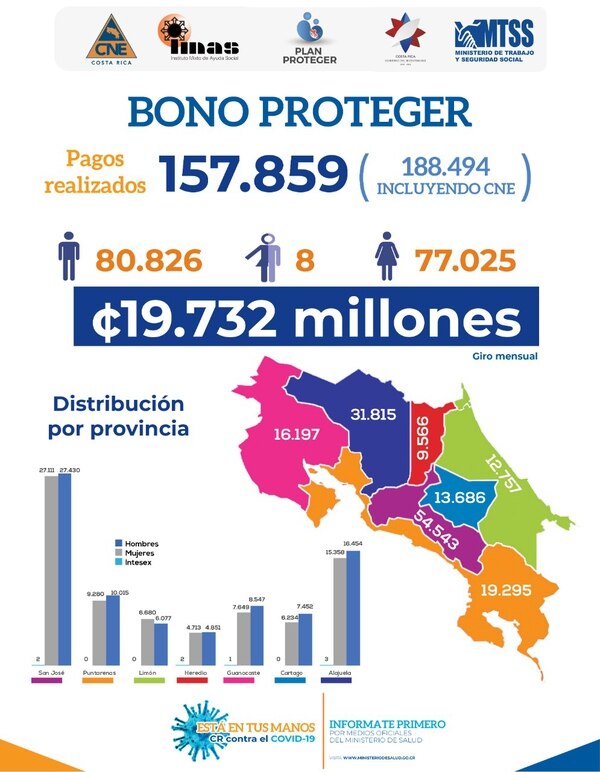 The subsidies of ¢62,500 or ¢ 125,000 are aimed at people who were left without or with less income due to the measures applied as a result of the pandemic, which led companies to reduce working hours, suspend contracts or lay off personnel.

- Advertisement -
Paying the bills
Previous articleCoronavirus in Costa Rica: Up to 755 the number of infected, 13 new cases in 24 hrs
Next articleImmigration holding center under ‘strict isolation’ for 14 positive cases of covid-19

QCOSTARICA - Costa Rica is the second country of the Organization...
Read more